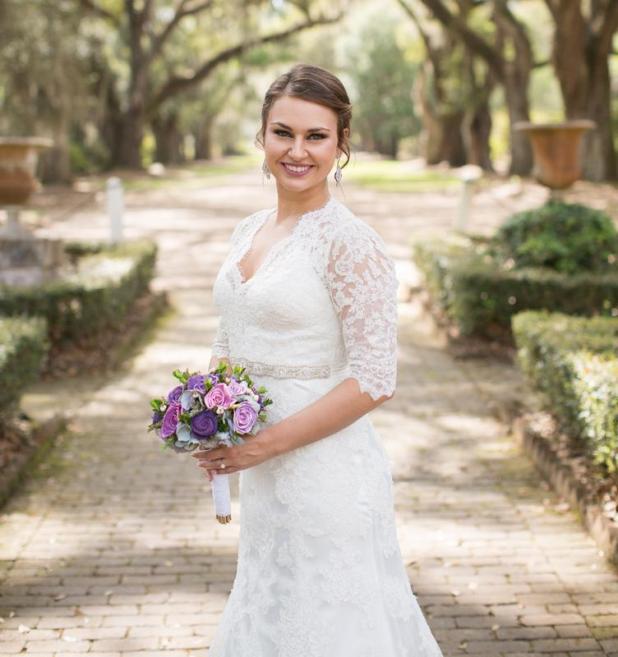 Hollie Elizabeth Blanchard and Christopher Michael Hargroder, both of Baton Rouge, were united in holy matrimony on the evening of Saturday, April 22, during a 5:30 p.m. nuptial service at Sunny Meade in Scott.
The bride is the daughter of Donald and Mary Blanchard of Midland. She is the granddaughter of Eugene and Florence Blanchard of Midland and the late Rhuel and Gladys Hoffpauir of Rayne.
Hollie is a graduate of Midland High School and Louisiana State University in Baton Rouge, where she earned a Bachelor of Science degree with honors in management-human resources. She is presently employed with Blue Cross Blue Shield in Baton Rouge.
The groom is the son of Tony and Darlene Hargroder of Central. He is the grandson of the late Herbert and Nora Hargroder of Crowley and the late Alvin and Jerry Hanks of Baton Rouge. He graduated from Parkview Baptist High School before attending Louisiana State University in Baton Rouge, where he earned a Bachelor of Science degree in management. He is currently employed at Hamilton Relay.
Escorted by her father, the bride was beautiful in a handcrafted slim silhouette gown with a charmeuse satin liner and two layers of delicate lace overlay. Featuring a scalloped V-neckline and three quarter length lace sleeves, the dress was finished with a stunning keyhole back and cloth-covered buttons. A single tier fingertip veil of scalloped ivory lace complemented the dress perfectly,
Hollie carried a large bouquet designed with several shades of purple sola roses, sola shell flowers, purple hydrangeas and spring green caspia filler hand-tied with ivory lace.
In keeping with tradition, the bride wore diamond earrings from her paternal grandmother as
“something old” and her wedding dress as “something new.” A rosary lent to her by her mother was “something borrowed,” while she wore blue suede shoes as “something blue.”
Jennifer Johnson, a college friend of the bride, served as maid of honor. Bridesmaids were Madison Tassin, Chelsea Bienvenu and Emily Dardis, all college friends of the bride. Lilly Blanchard, niece of the bride, and Rianna and Kayla Brassard, nieces of the groom, served as junior bridesmaids.
The bridal attendants were clad in long wisteria-colored dresses featuring lace bodices, illusion necklines, ribbon-defined waists and fluid, slitted mesh skirts.
Standing as groomsmen were Matt Barbay and Charlie Willis, friends of the groom; D.J. Sells, cousin of the groom; and Logan Williams, friend of the groom and brother-in-law of the bride.
The groom’s niece, Nora Carter, served as flower girl, and the bride’s nephew and godchild, William Blanchard, served as ring bearer.
Samuel Blanchard, the nephew of the bride, carrried a sign that read, “I’m just here for the cake.”
A special reading was given by Jared Blanchard, brother of the bride.
Following the wedding, family and friends of the newlywed couple joined them for an on-site reception at Sunny Meade.
Out-of-town guests at the event traveled from California, Florida, Indiana, Texas and various points throughout Louisiana.
On the Thursday evening prior to the wedding, the parents of the groom hosted a rehearsal dinner at Cafe Vermilionville in Lafayette. Guests at the 6:30 p.m. event enjoyed a four-course meal with a variety of choices.
Following a trip to St. Thomas, the couple is residing in Baton Rouge.