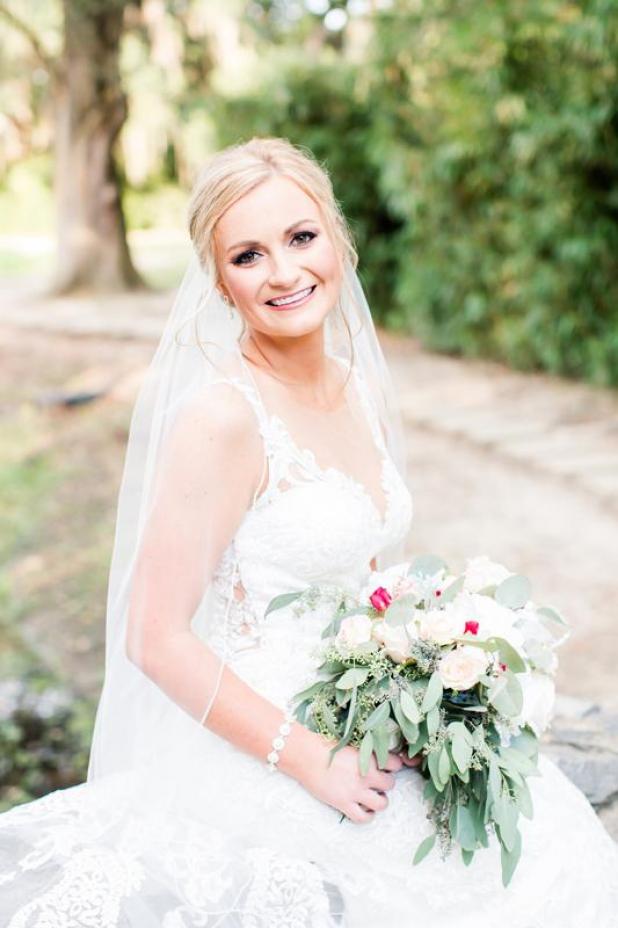 Hanna Nicole Breaux and Damond Jeffrey Meche, both of Egan, were joined in holy matrimony at 6:30 p.m. on Saturday, Oct. 7.
Fr. Charles McMillin officiated the double ring ceremony at Our Lady Help of Christians Catholic Church in Jennings.
The bride is the daughter of Lorraine and John Breaux of Egan. She is the granddaughter of Frank Jabusch Sr. of Egan and the late Vera Zaunbrecher Jabusch, and of Mr. and Mrs. Bernice Breaux of Rayne.
Hanna graduated from Iota High School in 2010 before attending the LSU School of Dentistry, where she earned a bachelor’s degree in dental hygiene in 2014. She is presently employed by Dr. Shawn Briggs, D.D.S, and by Acadiana Smiles.
The groom is the son of Patricia Meche and Jeffrey Meche, both of Jennings. His grandparents are Ella Richard of Jennings and the late Damond L. Richard and Mr. and Mrs. Whitney Meche of Jennings.
Damond graduated from Jennings High School in 2009 before attending McNeese State University. He is currently employed by Jeff Davis Electric Co-op.
Guests were greeted with programs by Abby Richard, cousin of the groom, and Michaela Jabusch, cousin of the bride, and escorted to their seats by Logan LeBlanc and Heath Petry, friends of the groom, who served as ushers.
Escorted to the altar by her father, the bride was beautiful in an ivory lace trumpet style gown featuring a striking illusion back with a long row of buttons. The gown’s skirt flowed into a detailed cathedral length train, and the bride paired her gown with a finger tip veil embellished with pearl beading.
She carried a hand-tied nosegay bouquet of white garden roses, cream and pink swirl garden roses and pink Sophie roses interspersed with pink sweetheart roses and off-white cymbidium orchids with burgundy throats, all surrounded by seeded and silver dollar eucalyptus. Entwined in the bouquet was a pearl rosary that had belonged to the bride’s late maternal grandmother.
In keeping with tradition, the bride selected the rosary in her bouquet as “something old” and her wedding dress and veil as “something new.” The earrings she wore were “something borrowed” and a piece of blue fabric that had belonged to her late maternal grandmother and was used to wrap the stems of her bouquet served as “something blue.”
Meredith Hebert and Emma Simar, both friends of the bride, served as matron of honor and maid of honor, respectively.
Bridesmaids were Katy Broussard, Celena Louvierre, Mallory Petry, Katelyn LeBlanc, Mallory Stelly, Erin Sattler and Amy Bergeaux, all friends of the bride, and Jessica Meche, sister of the groom.
The bridal attendants were clad in varying styles of burgundy floor length dresses and carried bouquets of burgundy, white, and cream and pink garden roses with cream cymbidium orchids with burgundy throats and seeded eucalyptus.
Kendall Meche, brother of the groom, served as best man.
Standing as groomsmen were Colby Hargroder, Ben Landry, Carson Hargroder, Justin Ringuet, Kegan Myers, Chase Fruge, Kolby Ringuet and Luke Ortego, all friends of the groom, and Brent Meche, brother of the groom. Junior groomsman was Gavin Dupuis, godchild of the groom.
The groomsmen wore navy suits with burgundy bow ties, while the groom wore a navy suit with an ivory bow tie.
Bailee and Alaina Dupuis, nieces of the groom, served as flower girls.
For her daughter’s wedding day, the mother of the bride, the former Lorraine Jabusch, selected a navy blue floor length gown.
The mother of the groom, the former Patricia Richard, chose a floor length gown in an olive color.
Both mothers wore shoulder corsages of cream sweetheart roses and cream cymbidium orchids with burgundy throats.
During the service, selected scriptures were read by Stacy Jabusch, godmother of the bride, and Brenda Oliver, godmother of the groom.
Following the wedding, family and friends joined the newlywed couple for a reception at the Grand Marais in Jennings.
The guest tables were topped in alternating fashion with lighted cylinders containing combinations of fresh roses, greenery and orchids; lanterns with lit candles surrounded by plumosa and gypsophila; and cube vases containing mixtures of roses and orchids.
The bride’s four-tiered cake was decorated with swirled butter cream icing and fresh flowers. It was served by Susan LeBlanc and Sandra Walker, aunts of the bride.
The groom’s square cake was decorated with a fondant sportsman’s logo in LSU colors. It was served by Brenda Oliver and Jennifer Richard, aunts of the groom.
Following a wedding trip to Sandals Royal Caribbean in Jamaica, the couple will reside in Egan.