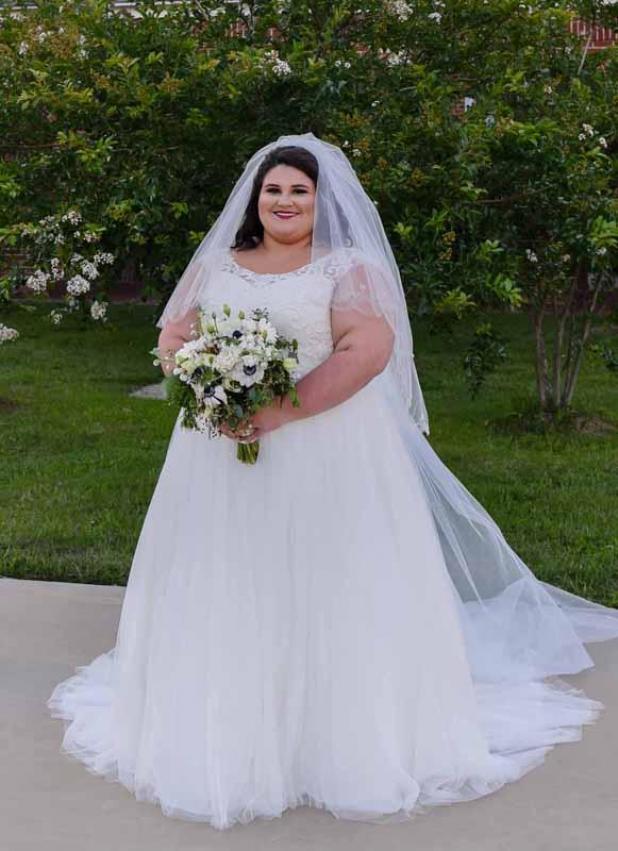 Sydney E’lise Breaux of Rayne and Cameron Elliot Theriot of Cankton were united in holy matrimony on Friday, July 14, at the beautiful St. John Berchmans Roman Catholic Church in Cankton.
Msgr. Russell J. Harrington officiated the 7 p.m. double ring ceremony.
The bride is the daughter of Alan and Shelley Breaux of Rayne. She is the granddaughter of Bonnie Fontenot and the late Verlin Fontenot, and of the late Bradley and Ura Breaux.
She is a 2016 graduate of Louisiana State University, where she earned a Bachelor of Science degree in biology.
The groom is the son of Elliot and Arlette Theriot of Cankton. His maternal grandparents are Gerald and Shirley Credeur of Cankton, and his paternal grandparents are Verna Theriot and the late Stonie Theriot of Carencro.
He is a graduate of the University of Louisiana at Lafayette, where he earned a Bachelor of Science in mathematics in 2016.
Escorted to the altar by her father, the bride was gorgeous in a classic ivory tulle ball gown. The bodice featured an elegant pattern of scrolled lace that beautifully complimented the gown’s illusion cap sleeves and chapel train. The dress was finished with a wide grosgrain sash adorned at the center with an opulent medallion of heavy crystal and pearl beading.
The bride paired her gown with a royal length fingertip veil and blusher with intricate beading.
Sydney carried a beautiful bouquet of hydrangeas, mini Gerber daisies, brunia berries, lisianthus, snow on the mountain, Queen Anne’s Lace and snowflake roses, all in shades of white, with hints of seeded eucalyptus and blue thistle. It was hand-tied with traditional burlap and satin ribbon with an intricate pearl design on the handle that highlighted the bride’s treasured locket from her late Godfather Benji, and the bouquet was finished with her “Maw Maw Breaux’s” rosary.
In keeping with tradition, the bride’s paternal grandmother’s rosary served as “something old,” while the bride’s wedding gown was “something new.” A penny given to her by her maid of honor was “something borrowed,” and her garter was “something blue.
Katie David, friend of the bride, served as maid of honor.
Bridesmaids were Karlie Shingleton and Kallie Shingleton, friends of the bride, and Kamrie Breaux, godchild of the bride.
The bride’s attendants were clad in short marine-colored chiffon dresses embellished with luminous pearls and sparkling crystals that created lovely face-framing collars.
They carried wreath bouquets of sunflowers, Viking chrysantheums, blue thistle and seeded eucalyptus hand-tied with natural burlap.
The groom wore a boutonnière that matched the bride’s bouquet and was created from mini Gerber daisies, snowflake roses and snow on the mountain finished with seeded eucalyptus and hand-tied with natural burlap twine.
Ross Prejean, friend of the groom, served as best man.
Standing as groomsmen were Austin Nolan, friend of the groom, and Bradley Breaux, brother of the bride.
The groomsmen wore boutonnières of blue thistle and seeded eucalyptus hand-tied with natural burlap twine.
Evann Bradleigh Vienne, cousin of the bride, served as flower girl.
For her daughter’s special day, the mother of the bride, the former Shelley Fontenot, selected a champagne-colored gown with a sequined empire waist bodice that flowed into a pleated skirt with a sash belt. The dress featured a crew neckline and three-quarter illusion sleeves and was finished with a hidden back zipper.
The mother of the groom, the former Arlette Theriot, chose a navy lace chiffon pant set featuring an open-front three-quarter sleeve jacket with ruched cuffs, a cascading hemline and lace detail along the shoulders. It was paired with a sleeveless shell with a round neckline embellished with beadwork in the same style as the jacket. Flowing chiffon pants with a draped front and flare legs completed the ensemble.
The mothers wore non-traditional shoulder corsages of Viking chrysanthemums, seeded eucalptus and blue thistle tied with natural burlap and twine bows.
The fathers of the couple wore matching boutonnières.
Selected scriptures were read by Kayla Breaux, godmother of the bride, and Mona Vienne, aunt of the bride.
Following the ceremony, family and friends joined the newlywed couple for a reception at the Rayne Ballroom in Rayne.
The bride’s three-tiered wedding cake was made of almond-flavored cake with coconut and raspberry fillings. The top and bottom tiers were decorated with ivory buttercream icing embellished with scrollwork and gold beads, and the middle tier was navy blue adorned with gold fleurs de lis. The confection was crowned with a “Mr. and Mrs.” cake topper and was served by Kayla Fontenot Breaux, the bride’s maternal aunt and godmother.
One tier of the groom’s yellow cake was tinted red and the other was tinted black to reflect the colors of ULL. The lemon-filled confection was iced in ivory frosting trimmed with red and black piping in a ULL theme and was served by the groom’s godmother, Lisa Kaldis.
On the evening prior to the wedding, the parents of the groom hosted a 7 p.m. rehearsal dinner at Cankton City Hall.
Following a wedding trip to Austin, Texas, the couple will reside in Cankton.