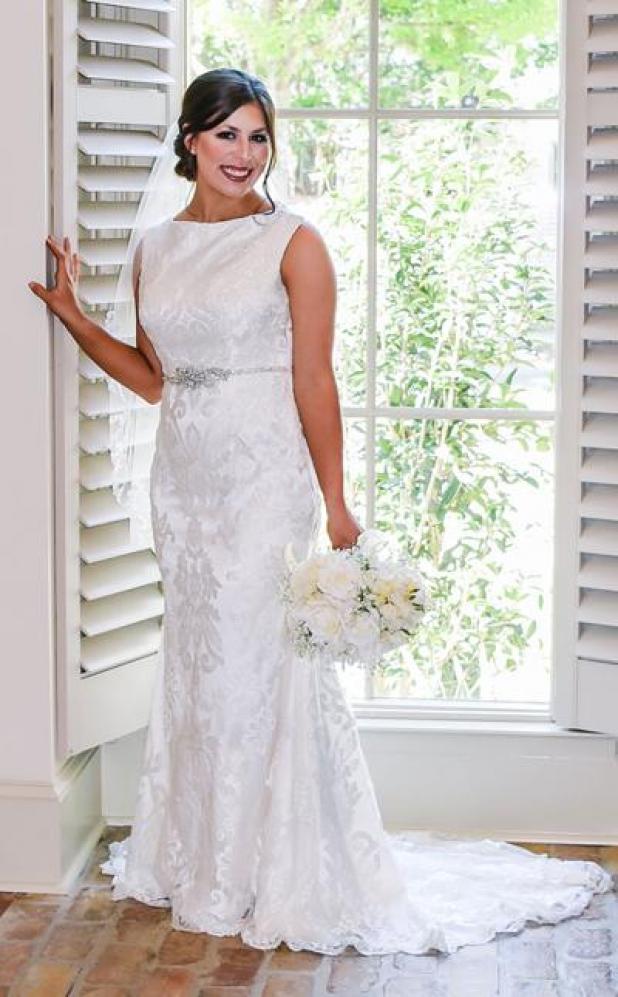 RAYNE - A six o’clock evening Nuptial Mass on the second of June of 2017 at St. Joseph Roman Catholic Church united in marriage Cynthia Marie Ledet and Stuart Jude Cook, both of Rayne.
The bride is the daughter of Mr. and Mrs. Timothy F. Ledet of Rayne. Her grandparents are Catherine Sandberg of Zwolle, the late Eugene A. Ledet, Larry Moore of Rayne and the late Cynthia B. Moore.
The groom is the son of Mr. and Mrs. Lewis J. Cook Jr. of Rayne. His grandparents were the late Danny and Lucille Champagne Domingue, and the late Lewis and Josie Petitjean Cook, all of Rayne.
Against a musical background provided by Dexter Thibodeaux, Stephanie Hoffpauir and Will Greene, guests were ushered to their seats by Patrick Hundley, Ben Mouton, Jacob Mouton and Jerry Menard.
The simple elegance of the church welcomed guests with springtime floral bouquets and pew markers of ivory satin hemmed with pearl beaded fringe.
Former St. Joseph pastor Rev. Fr. William Ruskoski celebrated the double-ring ceremony, joined by Fr. Gary Schexnayder, Fr. Matthew Higginbotham, Fr. Kevin Bordelon, pastor.
Scriptures were read by Jimbo Petitjean, groom’s cousin, and Gene Ledet, bride’s uncle. Gifts were offered by Haley Taylor and Catie Goff, cousins of the bride.
Escorted by her father, the bride was a vision in a formal wedding gown designed with a stylish bateau neckline and a delicate belt of crystals and pearls at the natural waist. The gown was enhanced with beaded ivory lace throughout and an exquisite illusion backline flowed into a semi-cathedral train detailed with a scalloped hemline. A simple haircomb held a finergtip veil of sheer illusion enhanced with ivory lace in keeping with her gown. She carried a bridal bouquet of ivory hydrangea, roses, sweetheart roses, baby’s breath and a hint of greenery gathered with ivory satin ribbon.
Traditional items selected by the bride for her wedding day included her paternal grandmother’s garter from her own wedding, which also served as something old and borrowed. Something new was a handkerchief from her paternal grandmother, while something blue was a special hairpin, a gift from a close and dear cousin.
Of special and sentimental value was a bridal rosary in the bride’s bouquet, a gift from the groom’s aunt, Billie Henry. The groom carried a rosary of his maternal grandmother, Lucille Champagne Domingue.
Attending her sister as maid of honor was Sarah Ledet, with Morgan Canezaro as matron of honor.
Bridesmaids were Peyton Bourgeois, Alaina Meaux, Adrienne Dailey, Taylor Gray, Anna Ledet and Rachel Cook.
Bridal attendants each wore a floor-length gown in a berry tone featuirng a sleeveless faux-wrap bodice designed with a deep V-neckline. A matching self-fabric belt was noted at the natural waist, from which flowed a full skirt. Each carried a handheld bouquet similar to the bride’s in a smaller version.
Flower girls were Scarlet and Eloise Cook, nieces of the groom and daughters of Jeff and Rachel Cook. Each wore a floor-length dress of multi-layered chiffon desigend with a round neckline, short sleeves and a berry sash at the waist.
Attending the groom as man of honor was his brother, Lewis Cook III.
Groomsmen were Luke Besse, Scott Curtis, B.J. Vidrine, Trey Cormier, Nick Ware, Will Fruge, Jeff Cook and Pete Petitjean.
Serving as ring bearers were Conner Baer and Michel Baer, sons of Clint and Erin Baer.
Male attendants each wore a formal suit in a true navy tone assembled with a light gray shirt and berry tie. The groom also wore a formal navy suit with ivory shirt and tie.
Immediately following the wedding ceremony, the newlyweds were honored during a reception held a The Crossing at Mervine Kahn which served as an elegant background for the special event.
Guests entered The Crossing greeted by an antique serving table for the guest registry. Topped with an ivory lace table runner and tall floral arrngement of ivory blooms and greenery, guests signed a vintage-inspired guest registry book. To the side of the table was a formal portrait of the bride upon a wrought iron easel.
Guest tables were topped with white linen tablecloths and decorated with floral bouquets and lighted lanterns.
Of special interest was a service buffet topped with a diaginal sheer tablecloth, red and white rose floral arrangement, and framed pictures of the couple, their parents and grandparents as a treasured memento of their special day.
Among the refreshments was the bride’s cake, a four-tier confection with Bavarian filling and cream cheese frosting decorated with ivory sweetheart roses and greenery.
The groom’s cake was a traditional double-layer German chocolate confection with chocolate filling and frosting decorated with sports memorabilia and surrounded with childhood photographs of the groom’s sporting events.
Prior to the wedding, a rehearsal dinner was held Thursday, June 1, at The Bank at Mervine Kahn in Rayne hosted by the groom’s parents.
Following their wedding trip to St. Martin Island of the French West Indies, the couple will reside in Rayne.
Marie is a 2012 graduate of Notre Dame High School of Acadia Parish, a 2016 graduate of the University of Louisiana at Lafayette with a bachelor of science degree in geology, and is currently enrolled in graduate school at ULL studying geology.
Stuart is a 2011 graduate of Notre Dame HIgh School of Acadia Parish, 2016 graduate of the University of Louisiana at Lafayette with a bachelor degree in education, and is presently employed by the Acadia Parish School Board as a teacher and coach at Crowley High School.