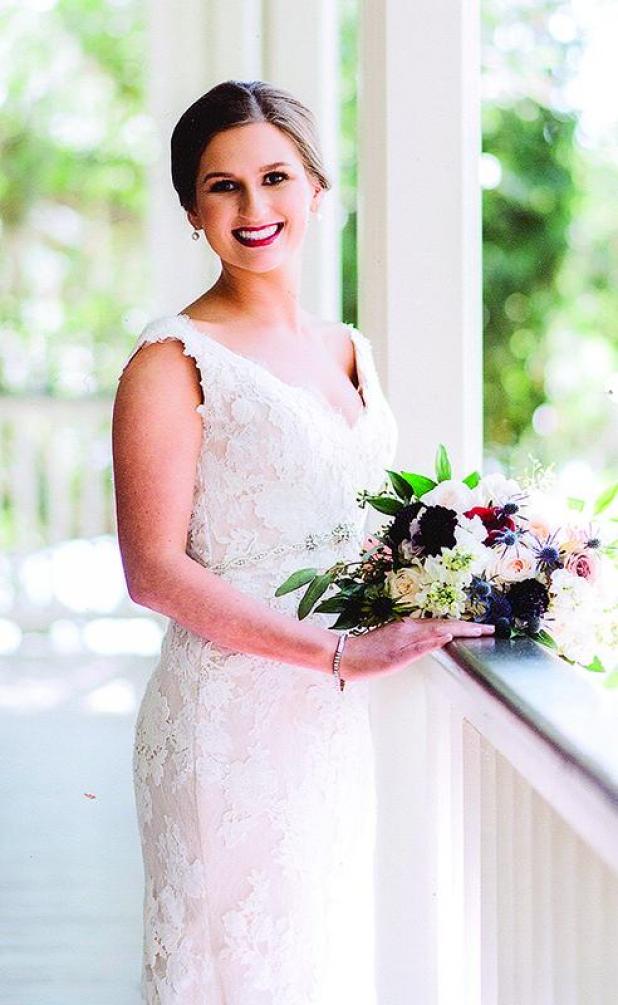 Madelyn Elaine Boone of Branch and Corey James Hulin of Crowley were united in the Sacrament of Holy Matrimony on Saturday, Aug. 11, at St. Edward Catholic Church in Richard.
Fr. Wayne Duet officiated the 7:30 p.m. nuptials.
The bride is the daughter of Lynn and Charlene Boone of Branch. Her grandparents are Herbert and Elaine Gossen of Roberts Cove and the late Robert Lynn and Ramona Boone of Branch.
Madelyn is a 2011 graduate of Church Point High School and a 2015 graduate of the University of Louisiana at Lafayette, where she earned a Bachelor of Science degree in nursing. She is presently employed as a labor and delivery nurse at Acadian Medical Center in Eunice.
The groom is the son of Roderick “Ricky” and Janice Hulin of Crowley. He is the grandson of Harold and Shirley Foreman Menard and Edna Richard Hulin and the late Dalton Hulin, all of Crowley.
The groom graduated from Crowley High School in 2011 before attending the University of Louisiana at Lafayette, where he earned a Bachelor of Science degree in business administration in 2015. He is currently employed as a staff accountant at Broussard Poché, LLP, where he is working to obtain his CPA license.
Escorted to the altar by her father, the bride was lovely in a romantic ivory Pronovias gown. The elegant dress featured a V-neckline and a deep, plunging V-back with scalloped edges trimmed in eyelash lace. The sleeveless, fitted gown was an exquisite creation of embroidered tulle, guipure lace and exquisite Spanish lace from Barcelona, with the intricate details of the lace patterns highlighted by the gown’s blush lining. A beautiful belt hand-beaded with rhinestones and pearls defined the dress at its natural waist, and the skirt flowed into an elegant sweep train with scalloped edging.
The bride paired her gown with a matching ivory chapel length veil of sheer illusion edged with satin and lace appliques. She also wore a brooch that had belonged to her late maternal great-grandmother clipped in her hair.
She carried an elegant bouquet of ivory O’Hara roses, tan quicksand roses, mauve amnesia roses, burgundy scabiosa, a single red heart rose, blue thistle, white stock, lemon leaves, Italian ruscus, silver dollar eucalyptus and seeded eucalyptus.
In keeping with tradition, the bride carried a handkerchief from Switzerland given to her by her late paternal grandparents and incorporated into her bouquet as “something old.” A pair of pearl earrings with diamond studs at the bottom given to the bride by the groom on the day of their wedding served as “something new.” “Something borrowed” was the brooch worn in the bride’s hair, while “something blue” was the groom’s childhood rosary entwined in the bride’s bouquet.
The bride’s sisters, Ellyn Boone Lalande and Jaclyn Gail Boone, served as matron of honor and maid of honor, respectively.
Julia Gossen Landry and Allie Gossen, cousins of the bride; Alayna Hains, friend of the bride; and Brittany Hulin, sister of the groom, served as bridesmaids.
They were clad in elegant floor length Jenny Yoo gowns of cinnamon rose chiffon in varying styles selected by them.
They carried bouquets of O’Hara garden roses, quicksand roses, mauve amnesia roses, blue thistle, white stock, lemon leaves, Italian ruscus, silver dollar eucalyptus and seeded eucalyptus.
The duties of best man were fulfilled by Jackson Landry, friend of the groom.
Standing as groomsmen were Alex Lalande, brother-in-law of the bride; Brandon Sonnier, Nicholas Hoffpauir and Brent Sonnier, friends of the groom; and Nicholas Gossen, cousin of the bride.
The flower girl was Lorraine Fontenot, cousin of the bride, who wore an ivory heirloom dress, and the ring bearer was Reed Comeaux, cousin and godchild of the bride.
Blake Foreman and Bryant Gossen, cousins of the bride, served as ushers.
For her daughter’s wedding day, the mother of the bride, the former Charlene Gossen, selected an exceptional full length navy evening gown by Calvin Klein. The dress featured an alluring off the shoulder design that enhanced its flared trumpet skirt.
The mother of the groom, the former Janice Menard, chose a blush metallic floor length gown with a classic A-line silhouette by Teri Jon. The elegant off the shoulder design featured a portrait collar with a princess seam cut.
Both mothers carried posy bouquets similar to those carried by the bride’s attendants.
Musical selections for the ceremony were provided by Naomi Broussard.
Selected scriptures were read by Cynthia Gossen Gibson, godmother of the bride, and Patrice Menard Hebert, aunt of the groom.
Following the wedding, family and friends joined the newlywed couple for a reception at The Warehouse Event Center in Rayne.
The venue was decorated in a rustic elegance theme that created a stunning ambience. The guest tables were covered with white linen cloths and light grey table runners and topped with floral arrangements and tapered candles. The arrangements were placed in custom made antique cypress boxes constructed by the bride’s maternal grandfather. Framed pictures of the bride and groom, floral arrangements and candles situated throughout the venue added to the ambience.
Accented with ivory roses and greenery, the bride’s cake was a three-tiered classic ivory buttercream confection with assorted fillings. It was served by the bride’s godmother, Cynthia Gibson.
The groom’s red velvet cake was made in the design of a yellowfin tuna and decorated with an offshore tuna-fishing theme. It was served by the groom’s godmother, Melissa Belsom.
Out-of-town guests at the wedding traveled from Mississippi, Pennsylvania, Texas and various points throughout Louisiana.
On the Thursday evening prior to the wedding, the parents of the groom hosted a 6:30 p.m. rehearsal dinner at Nicks on 2nd in Eunice, with guests enjoying a menu that included seafood and steak.
Following a wedding trip to Antigua, the couple will reside in Branch.