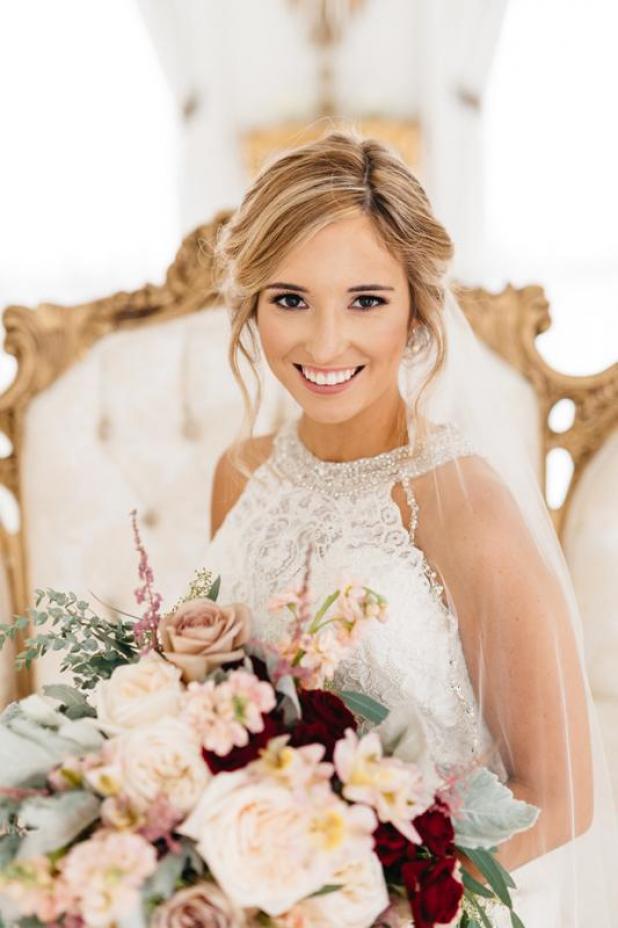 Kallie Lee Shingleton of Crowley and David Lee Breaux II of Mermentau were joined in holy matrimony on the evening of Saturday, Nov. 4, at St. Michael the Archangel Catholic Church in Crowley.
Fr. Randall Moreau officiated the 6:30 p.m. double ring ceremony.
The bride is the daughter of Thomas L. and Janet Rogers Shingleton of Crowley. She is the granddaughter of the late Jasper “Bea” and Mary Bufkin Shingleton and the late Kenneth B. and Shirley Myers Rogers.
Kallie graduated from Northside Christian School before attending Louisiana State University - Eunice, where she earned an associate’s degree in business management, and the University of Louisiana at Lafayette, where she earned a Bachelor of Science degree in business management. She is presently employed with Insurance Auto Auctions in Lafayette.
The groom is the son of David L. and Vickie Marks Breaux of Mermentau. His grandparents are Ronald T. and Dianna Thibodeaux Breaux of Mermentau and Kenneth J. and Sharon David Marks of Port Barre. He is the great-grandson of Laura Thibodeaux
David is a graduate of Midland High School and McNeese State University, where he earned a Bachelor of Science degree in agricultural business. He is currently employed by Bruce’s I-10 Wrecker Service, Inc.
Given in marriage by her father, the bride was gorgeous in an Allure Bridals Couture ivory lace gown with a café underlay and romantic mermaid silhouette. The sleeveless gown featured a high neckline with a beaded collar and a fitted sweetheart bodice. The back of the gown was finished with sheer illusion embellished with an intricate design of delicate silver beading, and the skirt flowed into a classic sweep train.
The bride paired her gown with a cathedral length scallop-edged sheer ivory veil trimmed with crystals and pearls and held in place with a beaded pearl fixture. For the reception, she changed into a matching waist length veil.
Kallie carried a hand-tied bouquet of garden O’Hara blush roses, ivory Majolica roses, pink astilbe, blush stock, wine dahlias and assorted eucalyptus.
In keeping with tradition, a brooch that had belonged to the bride’s great-grandmother served as “something old” and the bride’s pearl earrings served as “something new.” The bride’s mother’s original wedding band was “something borrowed,” while the bride’s garter belt was “something new.”
Karlie Shingleton, the bride’s twin sister, served as maid of honor.
Serving as bridesmaids were Natalie Hayes, Maddison Conrad, Tiffany Young and Sydney Theriot, friends of the bride; Megan Breaux, sister of the groom; and Haley Ardoin, cousin of the bride.
The bridal attendants wore elegant Morilee floor length gowns featuring ornately embroidered and beaded illusion bodices and V-backs in blush pink chiffon.
They carried hand-tied garden-style bouquets similar to that of the bride.
Dustin Breaux, brother of the groom, served as best man.
Standing as groomsmen were Dylan Breaux, brother of the groom, and Chance Henry, Chase Vincent, Gus Zaunbrecher, Michael Dupuis and Cole Reiners, friends of the groom.
The groomsmen wore slate blue tuxedos with blush pink ties, while the groom was distinguished in a slate blue tuxedo with an ivory tie.
Kenley Ardoin, godchild of the bride, and Rylee Thevis, cousin of the bride, served as flower girls, and Hudson Ardoin, cousin of the bride, served as ring bearer.
For her daughter’s wedding day, the mother of the bride, the former Janet Rogers, selected a Teri Jon evening gown in merlot taffeta featuring an off the shoulder neckline, crossover portrait collar and short puffed sleeves.
The mother of the groom, the former Vickie Marks, chose a Madeline Gardner New York sleeveless floor length gold lace gown accented with bronze-colored stones.
Selected scriptures for the ceremony were read by Keith Breaux, uncle of the groom. Musicians for the nuptials included an organist, violinist, trumpeter and vocalist.
Blake Shingleton and Michael Ardoin, cousins of the bride; Layson Young, friend of the bride; and Grant Clark, friend of the groom, served as ushers.
Following the service, family and friends joined the newlywed couple for a candlelight reception at the Grand Opera House in Crowley.
The guest tables were topped with tall clear vases and low gold crystal beaded vases filled with flowers matching those of the bride’s bouquet. The food tables featured five-foot candelabras and flowers, and a focal point of the decorations was a delicate swan ice sculpture.
The bride’s four-tiered cake was decorated with ivory lace icing and matching flowers and was surrounded by ivory candles in crystal candlestick holders of varying heights. It was served by the godmother of the bride, Sheryl R. Johnson.
The groom’s cake was made to resemble a crawfish pot full of crawfish with an LSU emblem on the side. It was displayed on a whiskey barrel table and served by Lynn O’Conner, godmother of the groom.
Out-of-town guests at the event traveled from Illinois, Mississippi, Rhode Island, Texas and Washington.
On the Thursday evening prior to the wedding, the parents of the groom hosted a rehearsal dinner at Mo’Crawfish restaurant.
Following a cruise of the Western Caribbean after a night in New Orleans, the couple will reside in Crowley.