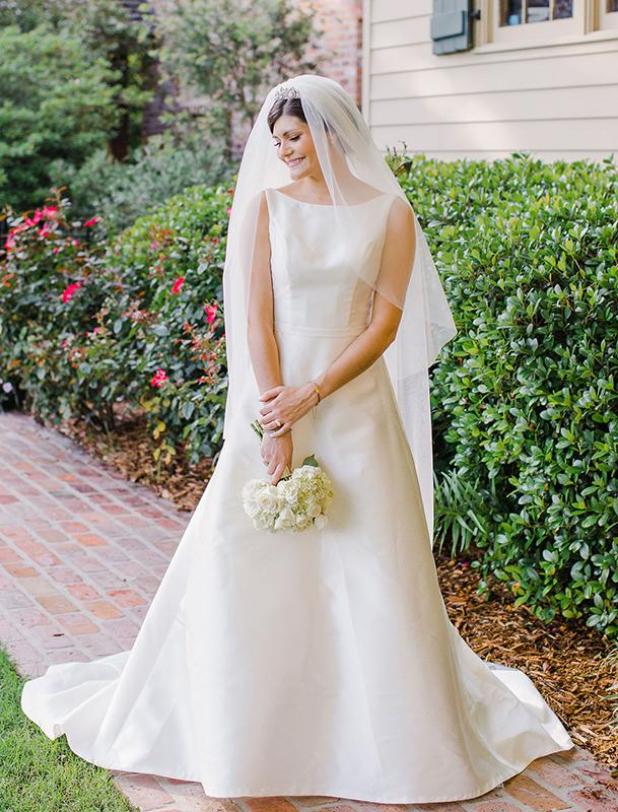 A Nuptial Mass at St. Michael the Archangel Church on Friday, June 7, united Caroline Weil Nickel and Jeremy Ross White in marriage.
Fr. Andrew Schumacher officiated the evening ceremony.
The bride is the daughter of Mr. and Mrs. Randal Jules Nickel. She is the granddaughter of Mrs. Yvonne Privat Nickel of Crowley, the late Mr. Lloyd James Nickel, the late Ms. Suzanne C. Cart and the late Mr. Martin B. Cart Sr. She is a 2011 graduate of Notre Dame High School in Crowley, and a 2015 graduate of Louisiana State University in Baton Rouge where she earned her Bachelor of Arts degree in mass communication and a minor in business. She is currently employed at Our Lady of Fatima Catholic School in Lafayette.
The groom is the son of Mr. and Mrs. James Richard White Sr. He is the grandson of Mr. and Mrs. Carrol Guilbeau of Carencro, the late Mr. Donald Eugene White Sr. and Mrs. Joann White and the late Mr. and Mrs. Gerald C. Colley Sr. He is a 2011 graduate of St. Thomas More Catholic High School in Lafayette, and a 2015 graduate of the University of Louisiana at Lafayette where he earned a Bachelor of Science degree in biology. In May 2019, he graduated from Louisiana State University Health Sciences Center in New Orleans with his Doctorate of Medicine. He will further pursue residency training in the specialty of family medicine at University Hospital and Clinics in Lafayette.
Escorted by her father, the bride selected a Mikado silk A-line gown with a bateau neckline, open back and covered buttons down the train. She wore a chapel length veil and blusher. The bride carried a hand-tied bouquet of white garden roses, hydrangeas, ranunculus and spray roses. She completed her bridal attire with an antique emerald and diamond ring that belonged to her paternal grandmother and a diamond and sapphire bracelet and earrings belonging to her aunt, Mary Aline Nickel Melanson. Also worn were two gold antique wedding bracelets given to her as a gift by her grandmother, Yvonne Nickel, on her engagement and wedding days.
Matron of honor was Courtney Melanson Jones, cousin of the bride. Maid of honor was Brooke Thomas Anzalone, close friend of the bride. Bridesmaids were Elizabeth Neal White and Brianne Thibodeaux White, sisters-in-law of the groom, and Ellen Charlotte Leonards, Elizabeth Rose Burleigh, Caroline Elizabeth Franklin and Hannah Elizabeth Suffern, friends of the bride. They wore Hayley Paige candlelight satin A-line gowns with V-necklines and box pleat skirts. Complementing their dresses they carried bouquets similar to the bride.
Best men were James Richard White Jr. and Jesse Ryan White, brothers of the groom. The groomsmen included John Woodley Nickel and Jack Fisher Nickel, brothers of the bride, and Hank Michael Boudreaux, Brandon Paul Schmidt, Dane Ronald Adams and David Charles Laborde, all friends of the groom. Ushers were Matthew Joseph Allen, Charles Michael Cassidy, Rees Douglas Gideon and Thomas Henry Schumacher, friends of the groom. Program attendants were Cortlandt Howard Cox, Channing Dolly Cox, Frankie Evelyn Persyn and Atlee Browning Persyn.
Flower girls were Evelyn Camille White, Ellington Kate White and Emory Elizabeth White, all nieces of the groom. They wore heirloom dresses and carried silver baskets filled with garden roses and greenery. Ring bearer was William James White, nephew of the groom, who carried a white pillow with a “W” monogram made by the bride’s aunt as a gift to the bride and groom. The readers were Mary Aline Nickel Melanson, Kellie DeRouen Duhon and Grace Kathryn Britsch. The gift bearers were Caroline Catherine Berry, Catherine Elise Nickel and Olivia Claire Watkins. The altar server was Julian Lloyd Nickel.
Following the ceremony a reception was held in Le Grand Hall at the Grand Opera House of the South. The night before the wedding a rehearsal dinner was hosted by the groom’s parents in the Grand Ballroom of the Opera House. After returning home from a honeymoon the couple will reside in Lafayette.