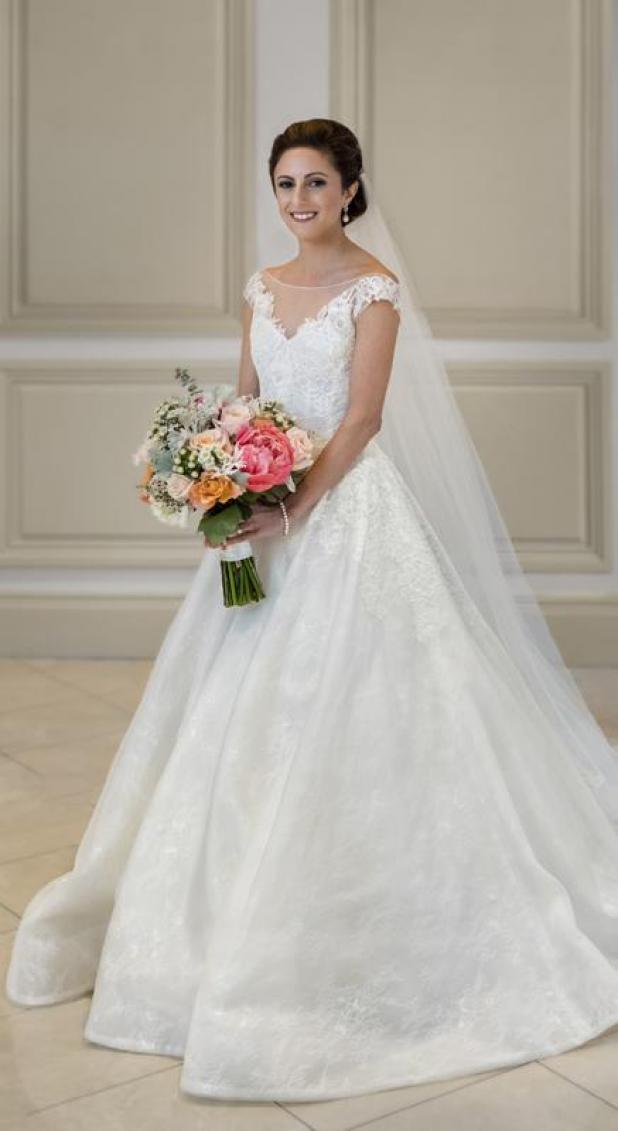 Mary Doris Reggie and Matthew Everett Eberhart were united in marriage on Friday, Oct. 20, at Immaculate Conception Jesuit Church in New Orleans.
Reverend Monsignor Keith DeRouen officiated the ceremony. Also in attendance on the altar were Reverend Monsignor Charles Dubois and Deacon Andrew Schumacher.
The bride is the daughter of Terese and Gregory Reggie of Crowley. Mary Doris is the granddaughter of Madlyn and Paul Hilliard and the late Dr. Charles Boustany Sr., and Doris Reggie and the late Judge Edmund Reggie. She is a graduate of Episcopal School of Acadiana, Amherst College, Tulane University Law School and the Tulane University A.B. Freeman School of Business. She is employed as an attorney for ExxonMobil Corporation in Dallas, Texas.
The groom is the son of Paulett and Michael Eberhart of Dallas. Matt is the grandson of Pauline and John Page and the late Noah Owens, and the late Marie Eberhart Sass and the late Noah Eberhart. He is a graduate of St. Marks School of Texas and Amherst College, and is presently attending the Cox School of Business at Southern Methodist University.
Escorted by her father, the bride wore a gown of pearl Italian silk organza and Chantilly lace accented by French Alençon lace on the bateau bodice and trickling onto the full circular skirt which extended to a chapel train. Her full-length mantilla was custom made with matching lace encircling the hem. She carried a bouquet of coral charm peonies with cream vendela, butterscotch and spirit roses accented with white nerine lilies, white hydrangea, hypericum berries and dusty miller.
Dr. Kate Rothermel Hubbard, friend of the bride, served as maid of honor. Bridesmaids included Jessica Eberhart Goodpasture, sister of the groom; Dr. Katie Reggie Werner, cousin of the bride; and Lindsey Rogers Bush, Skylar Washington and Stephanie King Mylenski, friends of the bride. The maid of honor and bridesmaids wore floor length gowns of Denmark blue chiffon gathering at the waist and flowing softly to floor length. They carried bouquets of coral charm peonies, free spirit roses and butterscotch roses.
Freya Eberhart, niece of the groom, was the flower girl. She wore a pearl colored lace floor length gown with a wreath of white aster in her hair. She carried a pomander ball of hydrangeas, Eskimo roses and spray roses.
Jamin Eberhart, brother of the groom, served as best man. Groomsmen included Case Martin, Hunter Birch, Graham Cannady and Jack Tosi, friends of the groom, and Frem Reggie, brother of the bride. The gentlemen wore traditional black tuxedos with black ties and cream rose boutonnieres.
Noah Eberhart, nephew of the groom, and Andrew Eppley, cousin of the bride, served as the ring bearers.
The guests were greeted at the church by Mary Catherine Reggie and Lauren Weber, cousins of the bride. Alex Goodpasture, brother-in-law of the groom, Ryan Malooly, cousin of the groom, and Jacque Noel IV and Drew Reggie, cousins of the bride, served as ushers.
Serving as readers for the ceremony were Ashley Boustany, cousin of the bride, Caroline Darmody, friend of the bride, and Rev. David Eberhart, uncle of the groom.
Following the ceremony, the bride and groom, along with the Young PinStripe Brass Band, led the guests in a second line to a reception at the Royal Sonesta where the guests were entertained by the band Karma.
The evening before the wedding the parents of the groom hosted a rehearsal dinner for the wedding party at Galatoire’s Restaurant followed by a Cocktails and Revelry Party on a French Quarter balcony, welcoming all the wedding guests for the weekend festivities.
Before leaving for their honeymoon trip to New Zealand and Bora Bora the couple along with their guests were entertained by Madlyn and Paul Hilliard with a brunch at the World War II Museum.
Mary Doris and Matt will reside in Dallas.