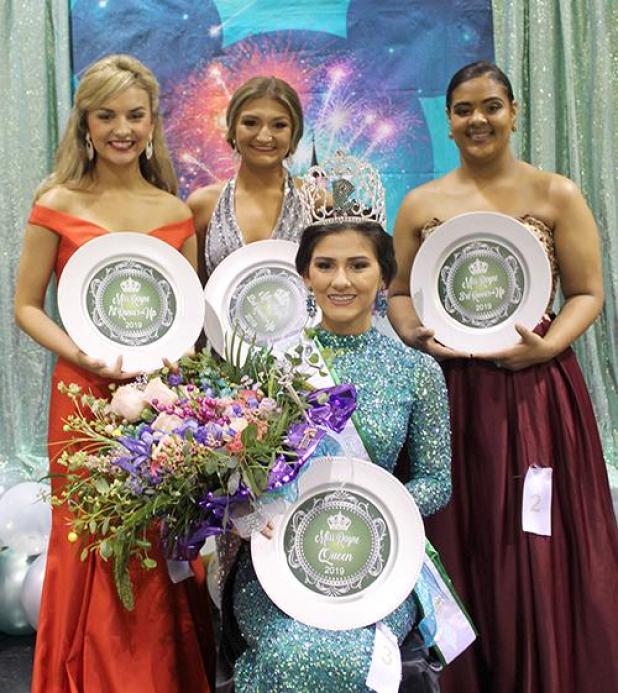 RAYNE - The 88th anniversary of the Miss Rayne Pageant was held Saturday, Aug. 10, as the Rayne Civic Center was the site for the 2019 event. Theme for the evening was “Rayne, The Most Magical Place on Earth.”
Crowned as the city’s new honoree was Kailey Blair Hollier, 16-year-old daughter of Paula and Sammy Hollier, who will represent the City of Rayne for the coming year. She is a junior student at University View Academy and is also employed at Piggly Wiggly of Rayne. She was sponsored by Spray Tans by Allyson for the pageant.
Kailey received her crown from last year’s honoree, Mary-Kate Simon, who completed her year-long reign by representing the City of Rayne in a most regal manner for which she was presented the annual Miss Rayne scholarship by Suzette Leonards, event director.
Completing the presentations to the new Miss Rayne were Mayor Charles “Chuck” Robichaux, Director Suzette Leonards and Co-Director Nikki Link.
Named 1st Runner-Up and given the opportunity to attend the International Rice Festival in October was Payton Alexander Broussard, 17-year-old daughter of Stuart and Angie Broussard. Payton is a senior at Ovey Comeaux High School in the Performing Arts Academy and was sponsored for the event by Bayou Silkscreening of Rayne. She was presented her award by Victoria Richard, 2015 Miss Rayne honoree.
Ali Leigh Delahoussaye was named 2nd Runner-Up and was also given the option to attend the Miss Acadia Parish Pageant. Ali is the 16-year old daughter of Patrick and Ashley Delahoussaye and is a junior at Rayne High School. She was sponsored for the pageant by the Rayne Lions Club who she represented as the 2018 Frog Derby Queen. Making her presentation was City Councilman Calise Michael Doucet.
Ali was also presented the Miss Congeniality Award by Dakota Henry, 2009 Miss Rayne honoree. The award is voted upon by the contestants following events and activities participated in during the past weeks by the contestants.
Named 3rd Runner-Up was Ambra Shaé Minix, 18-year-old daughter of Curtrese Minix and Neil Charles and a senior at Notre Dame High School of Acadia Parish. She was sponsored for the pageant by the Ebonite Civic and Social Club where she was named the 2019 Ebonite Queen. She was presented her award by City Councilman Kenneth Guidry.
Ambra Shaé was also presented the People’s Choice Award by Corinne Doucet, 2017 Miss Rayne honoree. The award is voted on by everyone in attendance.
Serving as emcee for the event was Cheryl R. Boudreaux. Judges were Charlotte Jeffers of Crowley, Erin Ledet of Pineville and Angelique Credeur of Crowley.
In addition to the numerous special guests in attendance for the 88th annual event were a number of past Miss Rayne title holders, including Tessa Richard Dischler (1999), Dakota Henry (2009), Kelsey Primeaux Lormand (2010), Taylor Hollier (2012), Kaitlyn Thibodeaux (2013), Victoria Richard (2015), Catherine Castille (2016) and Corinne Doucet (2017).
Of special significance was the 1993 honoree, Michaelle Spaetgens Simon, mother of Mary-Kate Simon, outgoing Miss Rayne. It was noted Mary-Kate was crowned on the 25th anniversary of her mother’s honor.
Committee members were Suzette Leonards (director), Nikki Link (co-director), Dakota Henry, Josie Henry, Taylor Hollier, Paula Hollier, Kelsey Primeaux Lormand and Tessa Richard Dischler.
Thanks were expressed to the following for another successful Miss Rayne Pageant: City of Rayne for sponsoring the competition, Phil Peltier for providing sound, Cheryl R. Boudreaux as emcee, Nikki Link with Project Dance for providing the opening dance number, the Rayne Acadian-Tribune for coverage and announcements, the Rayne Chamber of Commerce for attending to concessions, Frog Festival royalty and the Rayne Chamber of Commerce for manning the door entries and greeting guests, Tessa Dischler for auditing the competition, and the many volunteers who helped to make the landmark event a complete success.