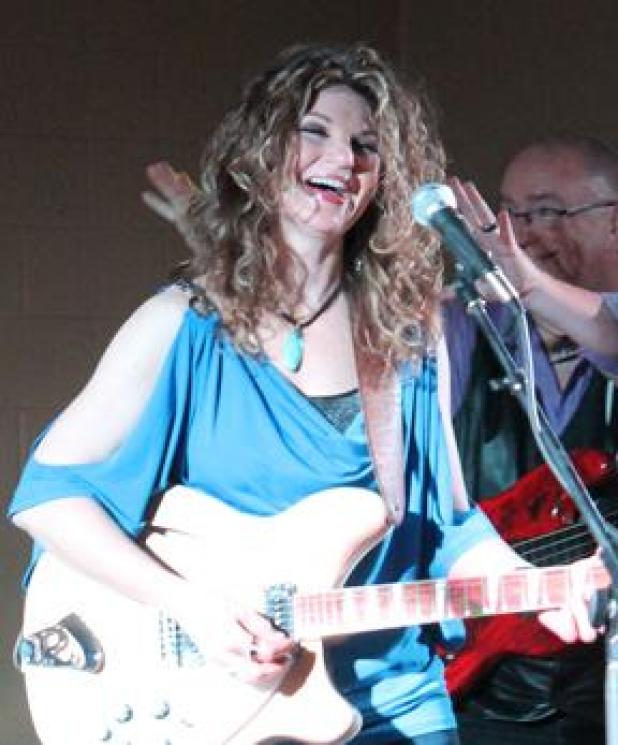 Americana singer-songwriter Shelly Waters is set to release her new, self-titled album on July 28.
Waters is the daughter of Jimmie and Charlene Pellerin of Rayne and is a 1986 graduate of Rayne High School.
She last performed in Rayne on March 14, 2015, at the American Legion Home for the release party of her Drive CD.
Announcement and a review of Waters’ new CD was made recently on broadwayworld.com. It follows.
The Evidence of Waters’ jambalaya-like recipe of sonic spices — and then some — are found within each of the dozen tasty tracks on Shelly Waters, which was recorded in Nashville with renowned producer and multi-instrumentalist Josh Kaler.
“I feel like this record is the true representation of what I feel when I play the music that I love,” said Waters. “This is Shelly. This is me. This is a reflection, and this is a representation of me.”
Waters’ musical roots run as deep and wide as the mighty Mississippi River that snakes through her home state of Louisiana. Her sound is the epitome of the holy tonal trinity of blues, country, and rock.
“I want my music to represent all of those genres — because that’s what I love best — and I love blending those sounds together,” Waters affirms. “Growing up in South Louisiana I listened to a lot of swamp pop, old R&B, and rock ‘n’ roll. Those tones and those iconic voices are what I’m drawn to and that’s what I feel the most comfortable singing.
“My music is Americana through and through.”
The uniqueness of Waters’ powerful and haunting voice brings her music to life and her lyrics betray a life filled with twists, turns, and adventure.
From the very first time the pick hits the strings on the album’s opening track “Drink the Water,” resonances of the brilliant Etta James’ masterwork “I’d Rather Go Blind” flood your senses.
“Red Hot Red” burns with a current classic country vibe. With “Jackpot” and “Knew You When,” the listener gets the first hint of what a Louisiana swamp would look, feel, and sound like.
“Time for a Change” is a refreshing shift in pace that connects the musical dots back to the Bob Dylan nugget “I Want You.”
Song sequence on an album is so often key. On Shelly Waters, “Lost My Way” and “Blood Sweat and Tears” serve as the perfect opening acts for the oh-so-appropriate closing track, Waters’ terrific take on Tom Petty and The Heartbreakers’ “Louisiana Rain.” The perfect sonic nightcap to an intoxicating collection of top-shelf tracks, the imagery of where the road and rain meet the Gulf Coast waters that haunts Petty’s number fits Waters’ long road to making music to a tee.
From intimate coffee shops to festival crowds of more than 10,000, Waters’ winding musical road has led her to share stages with a wide spectrum of artists as diverse as the legendary Loretta Lynn to the amazing Alynda Lee Segarra (Hurray for the Riff Raff).
Waters has also shared a billing with Randall Bramblett, Curley Taylor and Zydeco Trouble, Kim Simmonds, Savoy Brown, Kitty Wells, Mel Tillis, and a host of other well-known musicians.
While Waters’ unforgettable voice and unique blend of genres have captivated audiences for years, her journey began in a sleepy Louisiana town called Rayne.
Shelly Pellerin Waters was born to a Cajun-French family and was raised on a farm in Rayne. When she was 10 years old, she began taking guitar lessons, and, being a quick study, at the tender age of 11, Waters joined J.B. David and the Mule Skinners, a local French Cajun band.
The band played in Cajun dance halls, private events, and music festivals as far away as Nova Scotia. Touring with a band and signing autographs was quite an adventure for the 11-year-old.
After a year with the Mule Skinners, Waters started her own country band, Shelly and Southern Spice. The band played locally and regionally for many years. Along the way, Waters’ heartfelt rendition of Percy Sledge’s “When A Man Loves A Woman” — performed in a college beauty pageant — helped land her a chance to compete for the title of Miss Louisiana America.
As she entered her 20s, Waters had the stage chops of a showbiz lifer and she began getting inquiries from labels and others interested in helping her move to the next level. But this is where Waters’ story runs off the smooth, flat concrete of I-10 and into the murky bayou waters.
“Life happened,” Waters demurs. Amazingly, she says this without a trace of regret.
Waters’ path has led her from Louisiana to Texas to South Carolina and now to Maine. Along the road she experienced the ups, downs, and thrills of life. Her ventures and adventures included earning a US Coast Guard Captain’s License, living for eight years on a sailboat in the South Carolina Lowcountry and sailing over 20,000 nautical miles.
While Waters continued to dabble in music, it wasn’t until 2013 that she found her way into songwriting. Her debut album of original music, Drive, was produced by Grammy-nominated guitar phenomena Joe Taylor and released to critical acclaim in 2014. In 2016, Charleston City Paper selected her as a “Best of Charleston” Female Vocalist Nominee.
Waters plans to tour in support of her forthcoming album; tour dates will be announced soon.
For more visit: www.shellywaters.net