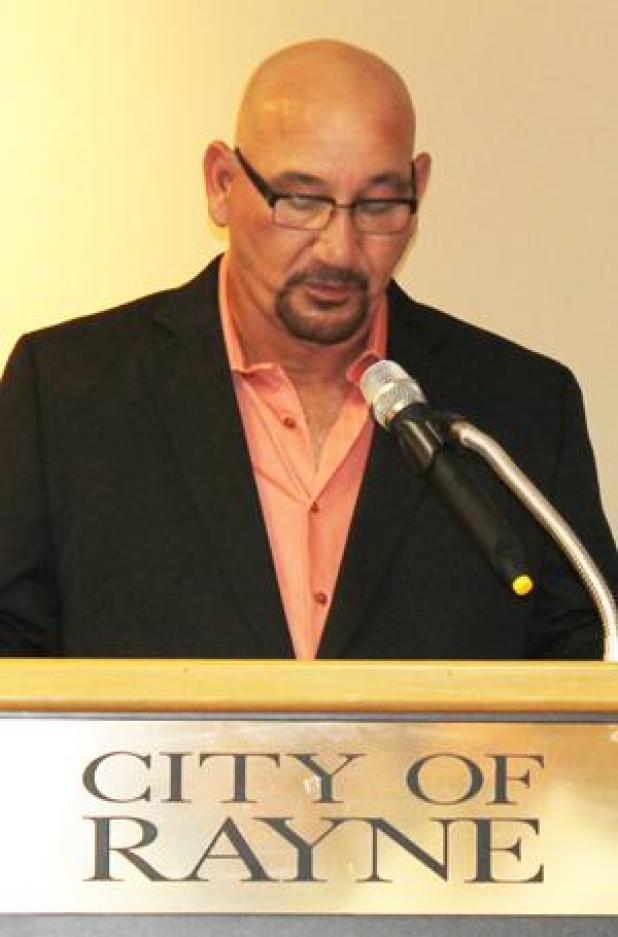 RAYNE - Tim Cormier, the soft-spoken president of Recovery Ministries, did his best Monday night to allay fears that his planned drug and alcohol rehabilitation facility would bring more drug addicts to the streets of Rayne.
Before Cormier spoke, Mayor Charles “Chuck” Robichaux explained that there was no council action to be taken concerning the project, that Cormier was simply present to explain his plans for the hospital building.
Cormier’s Recovery Ministries recently purchased the former Rayne-Branch Hospital building and is in the process of converting part of it into a “faith-based Christian retreat center providing hope and healing for individuals, families and communities struggling to recover from alcoholism and drug addiction.”
Because the purchase of the building and the ensuing work being done there has met with little fanfare, some area citizens felt that the project was “secretive.”
However, Cormier assured that he has been open and above-board with all of his dealings, has obtained all the necessary city permits and has nothing to hide.
“The facility will not be a methadone clinic nor will we be handing out any drugs on the premises,” he said. “It will be a non-medical environment to help people with alcohol and drug issues find salvation through the power of Christ.
“The individuals staying in our facility will be under supervision and not allowed to leave the facility without an escort. We will have 24-hour surveillance and security present,” he added.
Cormier, who has lived in Rayne since 2014, explained that, as with other similar “retreat centers,” admittance will be based on customary procedures facilitated through referrals from family members, background checks and “through assessments made after detox facilities if needed.
“Our facility will be a sober and drug-free living environment at all times.”
Cormier said the center will offer a 12-week program designed to help those in recovery learn new coping skills to regulate behavior, emotions and thinking. The program will include prayer, Biblical counseling, group session and some job placement training.
“We plan to work with local AA groups and Al-Anon meetings which include family counseling,” he said.
And the program is not limited to alcohol and drug addiction.
“Counseling will be designed to help clients through personal losses such as death, divorce, loss of children, abuse and any other related issues,” Cormier explained.
During a question-and-answer session, Cormier admitted that he has no “formal training” in the field of rehabilitation but said he will have “credentialed” individuals and “certified Christian counselors” working at the center.
He also admitted that, while he has no personal experience running such an operation, “I do have experience with the problems associated with addiction and have been involved with hundreds of addicts.”
Cormier added that, although he wasn’t at liberty to “throw out names,” a number of individuals well-educated in the field — “including doctors and psychiatrists” — are supporters of the center and will serve on the facility’s board of directors.
As a faith-based facility, the center will likely receive no federal or state funding and, since the retreat center is open to everyone regardless of whether or not they can pay or have insurance, the question of funding was raised.
“We have a number of supporters and donors,” Cormier said, pointing out that much of the work being done clearing out the hospital and Pauline Faulk Center “is being donated by the contractors.”
The retreat center will operate out of the former Pauline Faulk Center fronting South Bradford Street, to the rear of the hospital.
“The hospital side of the building will be renovated and updated for rental offices,” Cormier said. “Hopefully, we can entice professionals from the medical field to acquire office space so that, once again, our community can have in-house health care as once before.
“Also, with the renovation and updating of the property, our hope is for the rental of this facility to play a big part in supporting the retreat center.”
Monique Domingue, a nurse who once worked at the hospital, cautioned Cormier that opening a medical facility is such proximity to a drug-treatment center could be very enticing to companies that operate methadone clinics.
“Well, when you own the building, you can decide who you allow in and who not,” Cormier responded.
The issue of property values in the surrounding neighborhoods also was brought up.
“Just with the work we’ve already done clearing out and cleaning up the area, I think property values will probably increase with the renovations,” Cormier responded.
Mark Daigle, city inspector and director of zoning, planning and codes, was last to speak on the issue, explaining that Cormier’s realtor and attorney had contacted him three months ago regarding the hospital property.
He said the property is zoned “R-1,” which allows for “hospitals and institutions,” so, “Yes, it is zoned correctly.”
He went on to say that, during the four years he has worked for the city, he’s heard numerous times, “I wish someone would do something with the old hospital building.”
“Well, we have someone doing something with it — something positive,” he said.
He said he’s also heard, “They need to do something about the drug problem.”
Again, “We have someone doing something about it.”
He pointed out that the people who will use the center “are not being forced to go there, they’re crying out for help.
“I think we should give (Cormier) a chance. We all call ourselves Christians here, let’s show it.”