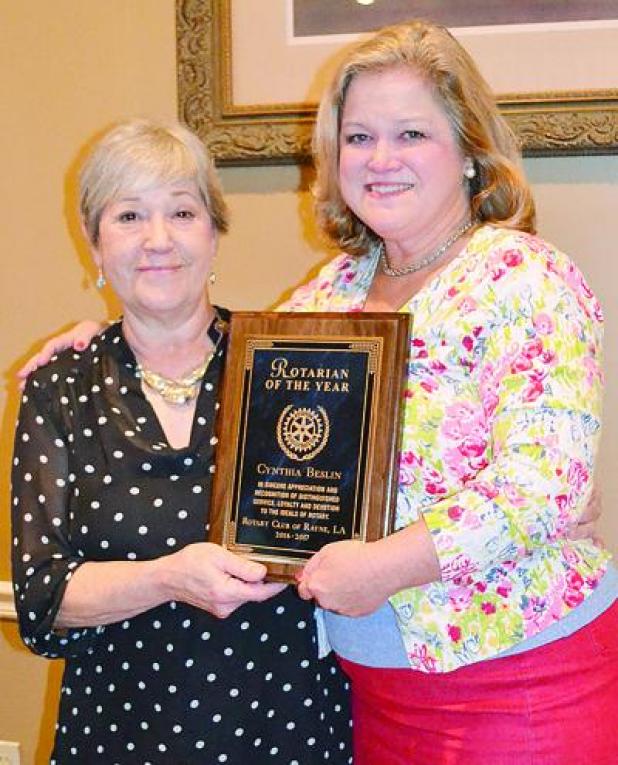 ROTARIAN OF THE YEAR: Cynthia Beslin, left, was honored as the Rayne Rotarian of the Year during the club’s annual installation banquet Thursday night at Chef Roy’s Frog City Café. Making the presentation is outgoing President Rose Schexnider. (Acadian-Tribune photo by Josie Henry)

Cynthia Beslin, who chaired the April Rotary Ribbit Run and took a leadership role in numerous other projects during the past year, was named Rotarian of the Year during the club’s annual installation banquet Thursday night, June 29.
“Cynthia embodies what a Rotarian truly is and has gone above and beyond in the capacity of leadership,” said outgoing President Rose Schexnider in presenting the award.
A visibly emotional Beslin compared the Rotary membership to being part of a family. “It’s just too unbelievable how great this club is,” she said.
Also recognized for her work with the club during the past year was Cynthia Oliver, who was presented the “Service Above Self” award.
“This was a hard decision for the board,” Schexnider said. “We had 29 members who were eligible for this award this year.”
Oliver, visibly moved, said she was “humbled” by the recognition.
“You have always been friends, but you became family,” she told her fellow club members. “With all the things that have happened with my own family, we would not have made it without your support.”
Oliver’s husband, Robert “Chet” Oliver, died unexpectedly in December.
The club’s third annual “Distinguished Service Award” was presented Thursday night to Dr. Eddie and Ann Palmer in recognition of their efforts in having Rayne designated as the first Official OST City in the state.
Serving as installing officer for the event was District 6200 Governor Francis Nezianya of the Rotary Club of Zachary.
Nezianya, who was enjoying his last few days as District Governor (his term expired June 30), said this past year was both great and historic.
He spoke of how he suspended his club visits in the wake of the August flooding event so that he could concentrate on the District’s efforts to help fellow Rotarians and everyone in need at that time.
He complimented the Rayne club on similar efforts in the aftermath of the flood and in its solid record of fundraising for various Rotary projects locally, districtwide and internationally.
“Just imagine how many lives you have touched through your fundraising projects,” he said.
Nezianya thanked Schexnider for her outstanding record of leadership during the past year.
“Without a good leader there is no team effort,” he said. “I encourage each of you to build on what you have this year and keep moving forward.”
In her final address as club president, Schexnider thanked the membership “for an amazing year.
“We made some memories,” she said. “The last year has been a blur. They say time passes fast when you’re having fun, so I guess we had fun.”
Natasha Domagalski, incoming president, thanked the membership for the “trust and confidence” shown in her.
“It will be a challenge to accomplish as much as Rose did this year, but I will be counting on her advice,” she said.
“We’re just six years old; we’re still a young club,” Domagalski continued. “We’re also a small club, but we are mighty and we are all committed to services above self.”
The new president paid special tribute to the charter members of the club, thanking them for their vision in establishing the Rotary Club of Rayne.
Along with Domagalski, officers installed Thursday night included Jimmy Fontenot, president elect; Troy Kibodeaux, vice president; Michelle Veillon, secretary; Cheryl Rivette, treasurer; Roland Boudreaux, sergeant-at-arms; Robert “Bob” Landry, Foundation chair; Brooke Thomas, public relations chair; Jared Lawless, club service chair; and Rusty Wilson and Ricky Bonin, directors.
Among awards presented during the night, Schexnider recognized the efforts of outgoing Secretary DeBorah Smith and of Treasurer Cheryl Rivette, who was re-elected to that position.
Each of the remaining outgoing officers and chairs was presented a lapel pin, including Steve Bandy, vice president; Celeste Prejean, sergeant-at-arms; Abby Guidry, public relations chair; Kyle Broussard, Foundation chair; and Bob Landry, membership chair.
Perfect Attendance Awards were presented to:
Nick Simoneaux - 18 years (includes service in other Rotary Clubs);
Bob Landry - 13 years (includes service in other Rotary Clubs);
Steve Bandy, Frances Bihm, Kyle Broussard, Troy Kibodeaux, Jared Lawless and Cheryl Rivette - six years;
Ken Arceneaux and Jimmy Fontenot - five years;
Natasha Domagalski, Abby Guidry and Rose Schexnider - four years;
Cynthia Oliver - three years;
Cynthia Beslin - two years; an
John O’Brien, Michele Veillon and DeBorah Smith, one year.
The banquet was held at Chef Roy’s Frog City Café.