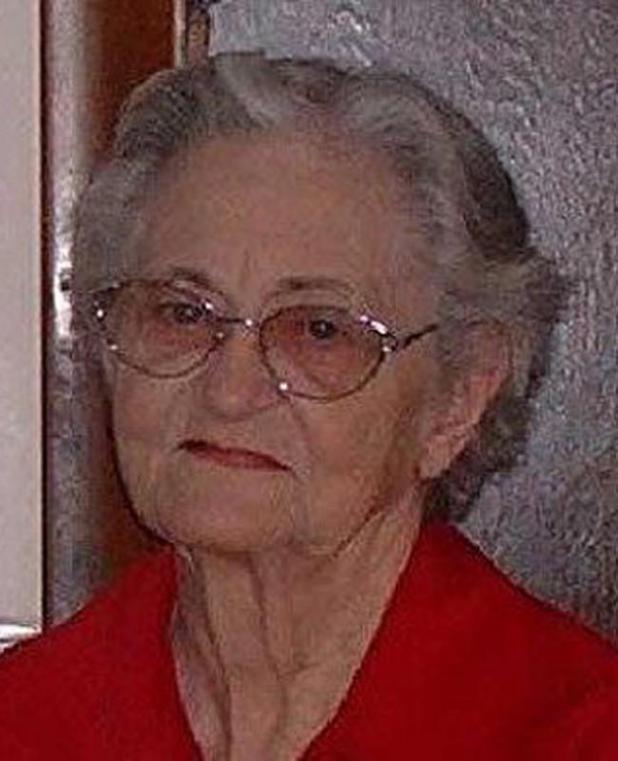 A Mass of Christian Burial will be held Friday, Oct. 28 at 1 p.m. at Immaculate Heart of Mary Catholic Church, Crowley for Nella Breaux Duhon of Crowley, who died peacefully at age 101 in the home of her late sister, Duiby Martin, on Sunday afternoon, Oct. 23, 2016.
Fr. Clint Trahan, pastor of Immaculate Conception Catholic Church in Morse, will officiate for the services. The family requests visiting hours Friday from 10 a.m. to 12:30 p.m. A rosary will be recited at 11 a.m. by the Immaculate Heart of Mary Ladies Altar Society. Burial will be in Woodlawn Cemetery.
Nella, affectionately known as Nannie to her family was born on Sept. 1, 1915, in Maurice, the sixth of nine children to Theophile and Celise Vincent Breaux. At age 15 she married Eraste Duhon. Theirs was a remarkable marriage lasting 82 years until Eraste’s death in 2012. In the 1940s, they moved from Maurice to Crowley where after World War II they where joined by her sister and brother-in-law Duiby and Benoit Martin. Living next door to each other, Nella devoted herself to helping the Martin’s raise their seven children. In their daily routine, Nella did the washing and ironing and Duiby cooked the large mid-day meal. The children viewed her as their second mother to the end. Both widowed Duiby and Nella spent their last years together.
Nella was a lifelong member of Immaculate Heart of Mary Catholic Church and a member of the Altar Society. She took special pride in baking cakes for the churches many sales. The family also has fond memories of her fresh, made from scratch maque choux, of her help canning figs and her hours spent shelling pecans.
Nella was preceded in death by her husband Eraste; her parents, Theophile and Celise; and her brothers and sisters, Odan Breaux, Ethel Landry, Anna Duhon, Theola Vincent, Osta Breaux, Stallace Breaux, Uta Maynard and Duiby Martin.
She is survived by her seven nieces and nephews and their spouses, Lindell and Ernest Perez of Houston, Wavey and Sue Bearb Martin of Conroe, Texas, Brenda and Terry Robert of Gonzales, Mona Binion of Centennial, Colorado, Katry and Lisa Leger Martin, Marion and Jackie LeDoux Martin and Phil and Sarah Hoffpauir Martin, all of Crowley; 22 grand- and 38 great-grandnieces and -nephews .
Thanks is extended to a wonderful group of caregivers who gave Nella great comfort in her final years including Inez “Toot” Vincent, Emma Castile, Tonya Sherrick and Paula Caplinger. A special thanks to St. Joseph’s Hospice of Lafayette, nurse Kathleen Guidry and caregivers Margie Castillo, Jessica Myers and Rita Monceaux who cared for her in her final months
In lieu of flowers donations can be made to St. Jude’s Children’s Hospital.
Condolences may be sent to the family by www.geesey-ferguson.com.
Arrangements have been entrusted to Geesey-Ferguson Funeral Home of Crowley.