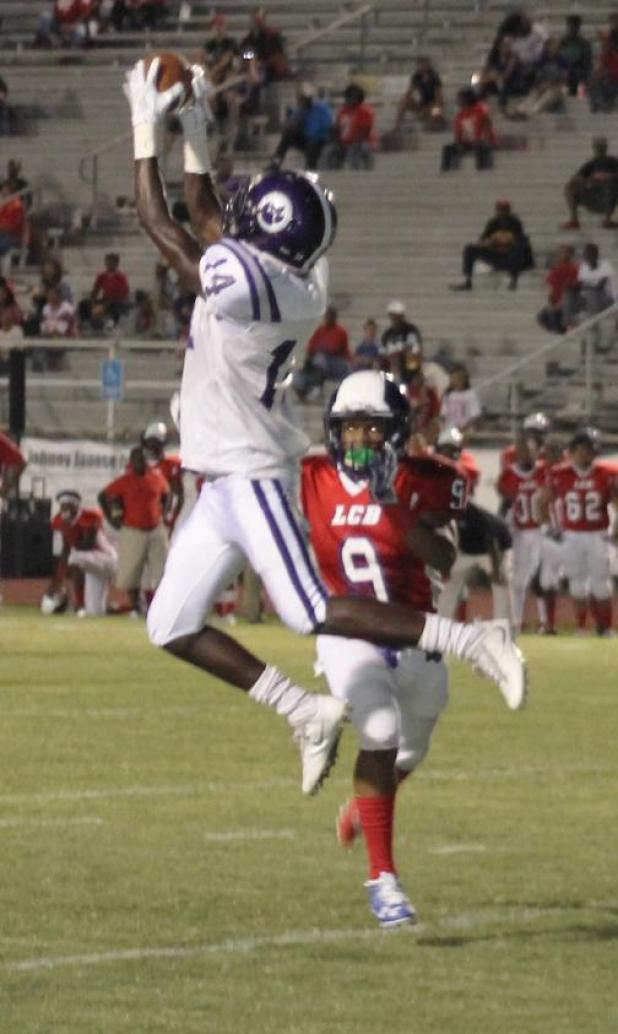 Rayne's Johnny Deculit goes up for a touchdown pass during the Wolves' district opener at LaGrange. (Acadian-Tribune Photo by Lisa Soileaux)

LAKE CHARLES - When it comes to district play, it’s a whole new ball game during football season. The pressure is on, every play matters, and teams are hungry for a district crown. That’s just what Friday’s 3-4A district opener between the LaGrange Gators and Rayne High Wolves was all about -- on all three counts.
A quick Gator defense and a few key Wolves banged up, the difference was just enough for LaGrange to pull out a 15-14 win over Rayne. The loss saw the Wolves suffer their first loss of the season, 5-1, and a 0-1 district start.
“In a tight game like this, every play counts,” stated Rayne Head Coach Curt Ware on his team’s first loss of the season. “We had a couple of opportunities in the first half, but we came up short with a couple of fumbles aand that really hurt. Against a quick, experienced team like this (LaGrange), they will make you pay.”
The Wolves opened the ballgame with a score on the opening drive of the night, a long series on runs by Trent Winbush, Darien Harmon and Johnny Deculit. A 23-yard touchdown pass from Donald Doucet to Johnny Deculit saw Rayne light up the scoreboard. The extra point was missed and Rayne held an early 6-0 lead midway through the first quarter of play.
The Gators’ first drive was a three and out with Rayne looking at a drive from midfield. A couple of key penalties and Doucet brought down by LaGrange defender behind the line, Rayne was forced to punt, leaving the Gators deep in their own territory.
Another three and out for the Gators saw another LaGrange punt, but this one was blocked by Rayne and recovered in the endzone for a safety and a 8-0 Rayne lead with the start of the second quarter.
A successful LaGrange punt saw Rayne begin a drive at their own 20 yard line. Runs by Darrin Wilridge, Darien Harmon and Trent Winbush saw Rayne near the red zone. But, a Rayne fumble near the 38 yard line was scooped up by Devan Jack who sprinted into the endzone for the Gators’ first score of the night, compliments of their defense. The extra point split the uprights, but Rayne held a 8-7 lead with over six minutes remaining in the first half.
Another long drive by Rayne was halted by LaGrange, who assumed possession with just over a minute remaining. Rayne’s Zach Fontenot slapped away a pass attempt, halting the Gator drive, and ending the first half of play as the Wolves maintained a 8-7 lead.
The third quarter saw both teams exchange long drives, void of scoring, until LaGrange quarterback Colton Frank connected with Devan Jack, setting up a nine-yard touchdown run by Kameron Davis. A fake extra point saw Anthony Johnson find Jack for two points and a 15-8 LaGrange lead. as the third quarter ended.
Rayne answered midway through the final quarter with a long completion from Doucet to Winbush and a couple runs by Deculit, Harmon and Winbush, setting up a 20-yard TD pass from Doucet to Jaylon Reed. The extra point was wide left and Rayne trailed 15-14 at the five minute mark.
LaGrange’s last drive of the night was halted by a deflected pass by Fontenot and a quarerback sack by Tony Roberts, giving Rayne the ball at their own 36-yard line and a last chance for a score.
Runs by Harmon and Winbush set up a couple of pass attempts for Rayne, but fell short. A personal foul call against the Gators helped the Wolves past midfield, but a fourth and one run by Harmon saw Rayne come up just short, allowing LaGrange to run down the remaining 43 seconds for the one-point win.
“We ran the ball well,” continued Ware, “considering we played a fast, quick team tonight. Most of the time they would fill in wherever they needed before our guys could hit the slot. Considering the stats, our guys ran well but just couldn’t find the endzone.”
Despite out-numbering LaGrange 354 to 107 in total offensive yards, the Gators’ quickness was enough for quick scores and a fast defense for the district win.
Rayne was led in their rushing game by Darien Harmon with 166 yards on 32 carries. Trent Winbush had 22 carries for 103 yards, while Johnny Deculit recorded nine carries for 38 yards.
In the air, Donald Doucet recorded three completions for 55 yards and two touchdowns.
Rayne receiving corps included Deculit (1-for-23 yards, 1 TD), Reed (1-for-20, 1 TD), and a grab by Winbush for 12 yards.
Leading the Rayne defense were Deculit, Roberts and Antonio Gabriel each with three tackles and three solos. Tyreece Beverly, Zach Fontenot and Christian Svendsen tallied 2.5 tackles and two solos. Finishing up the Wolves on defense were Dylan Cormier, Tavares Poullard, Marlon Foreman, Carl Davis, Darian Richard and Jamian Evans.
Roberts, Beverly, Svendsen and Poullard each recorded tackles for a loss.
The Wolves will return home Thursday when they will attempt to even their district slate while hosting Leesville. Kick-off is at 7 p.m. at Wolf Stadium.