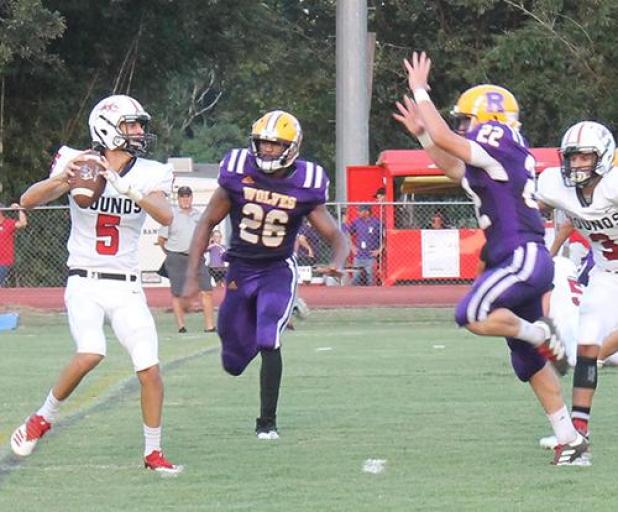 RAYNE DEFENSE CLOSING IN - Rayne High defenders Ron Charles (26) and Deuce Comeaux (22) close in on Welsh quarterback Landen Broussard during the Wolves’ season opener Friday night played at Wolf Stadium. The Greyhounds were able to slip past the Wolves in the final two minutes of the ballgame for a 20-16 win over the Wolves. (Acadian-Tribune Photo by Lisa Soileaux)

RAYNE - The first football game of the 2019 regular season looked promising for the Rayne High Wolves throughout three and one-half quarters of play.
With a 16-14 lead on fourth down with less than two minutes remaining in the ballgame, Welsh quarterback Landen Broussard connected with Gavan Guillory for a 80-yard completion and the go-ahead touchdown for the 20-16 Greyhounds win.
“It’s hard to loose one like that, especially the season opener,” stated Rayne High’s Kaine Guidry as he lead his first season opener as head coach.
“We fought hard and never gave up,” he continued. I told the kids they fought hard and one play won’t define who you are. Just so happen, that one play defined the final score.”
The Wolves posted 182 total offensive yards on the night.
In the air, Wolf quarterback Collin LaCombe connected with four completions for 81 yards.
Rayne receivers tallying completions were Jamarcus Monroe (38 yards), Ron Charles (20 yards), Reid Dupont (14 yards) and Deuce Comeaux (nine yards).
Leading Rayne’s rushing game were Monroe with 69 yards on eight attempts, Reid Dupont with five tries for 19 yards and Ron Charles tallying 17 yards.
“Our offense is beginning to come around and they are slowly fitting into the offense we’re running, Guidry continued.
“They are starting to understand the concepts. It will take some time as we have a completely new front five. But they are coming along and getting better every time we face a new opponent.”
Rayne’s first score of the game came on a strange hike by Welsh’s center, sending the football into the endzone. Rayne’s Tony Cormier fell on the ball and gave the Wolves a 6-0 lead as the first quarter ended.
The Greyhounds answered with a tochdown and extra point to gain a slim 7-6 lead in the second quarter, but that didn’t last long.
Rayne’s Jamarcus Monroe used some of his rushing yards to touch the endzone later on in the second quarter. An extra point by Deuce Comeaux put Rayne up 13-7 for the halftime break.
The Wolves gained the only points of the third quarter with a fieldgoal, adding a trey for a 16-7 lead heading into the final quarter.
The Greyhounds saw the endzone midway through the fourth quarter, placing the score at 16-14, still in favor of the Wolves.
But, the 80-yard touchdown pass in the final two minutes sealed a 20-16 win for the Greyhounds.
“Our defense played well tonight,” Guidry noted. “Our front five did a good job all night long. I’m anxious to see the stats, because I don’t think they got many rushing yards from our defensive line.
Of Welsh’s 249 yards of total offense, the Rayne defense held strong allowing only 94 yards on 31 attempts. However, QB Landen Broussard tipped the scales as he finished the night with 155 yards in the air for the Greyhounds.
“Our usual guys who excel did a good job tonight,” Guidry noted, “like Damarcus (Richard) is Damarcus. He played well as usual.
“Ron (Roberts), what can you say about him. He always plays well defense -- he’s a beast out there.
Leading the Rayne defense Friday was Ron Roberts with 9 tackles, 8 assists, a quarterback sack and 3 tackles for a loss.
Jamarcus Monroe, Will Arceneaux and Deuce Comeaux recorded 4 tackles, with Monroe nabbing an interception.
Miguel DelValle, Miles Doucet and Bleyton Francis recorded 3 tackles on the night, while Peyton Francis, Brandon Aguillard, Tony Cormier, Jamarcus Richard and Griffin Champagne tallying 2 each.
“We had a lot of guys play well tonight and it looks like they are starting to jell. I hate to harp on that, but we do struggle with lack of depth with all the rookies we have on the field most of the time.
“We try to roll guys in a out the game to get the most out of everyone, especially on a hot night like this. It will come, but it will take some time and more experience.”
“One guy who stepped it up tonight was Deuce Comeaux -- he really played really well. Plus, he made that big kick to give us the lead. That’s always a plus for high school football when you see a fieldgoal on Friday night. He played really well tonight.
“We had a couple of chances to extend our lead and ice it down and we stalled. It is what it is. You just have to work on what we have and come back better next time. I really believe that our guys believe we can do that. That’s what I like to see in players -- wanting to get better and working hard to get there.
The Wolves will hit the road to Abbeville on Friday where they will face the Wildcats. Kickoff is set for 7 p.m.