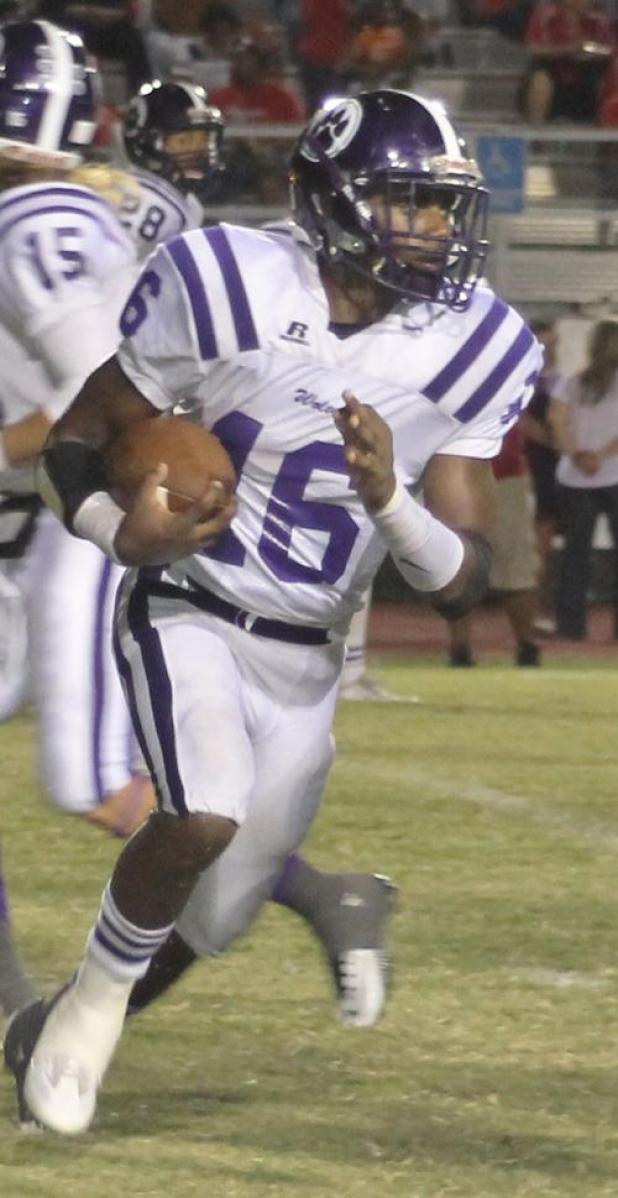 DERIDDER - Despite being off during the day Friday due to the Rice Festival schedule, the Rayne High Wolves were on that evening as they posted a 48-0 district win over DeRidder.
“I’m really proud of our guys tonight,” stated Rayne Coach Curt Ware following Friday’s win over the Dragons. “We practiced well all week and that really showed tonight.”
The Wolves amassed almost 400 offensive yards during the win, including 145 of those in the air.
“T-June (Doucet) did a good job tonight finding his receivers,” Ware noted of his quarterback who threw three touchdowns during the win. Doucet was 6-for-8 with 145 completed yards.
Defensively, “I can’t asked for much more of our defense tonight,” continued Ware. When you only allow your opponent five first downs during the entire game, our guys did their job here tonight.”
In addition to only five DeRidder first downs, Rayne allowed the Dragons only 88 total offensive yards.
“I think our defense has improved with every game this season,” continued Ware. “They are playing smarter and stepping it up when they need to.”
With a slow start for both squads Friday, the Wolves warmed up midway through the first quarter with runs by Trent Winbush and Daran Harmon. A catch by Jaylon Reed setup Winbush’s first of four touchdowns on the night. Daran Richard split the uprights for the extra point and a 7-0 Rayne lead.
Rayne’s very next drive saw saw Doucet find Reed in the endzone for Rayne’s second score of the game. Richard added another extra point for a 14-0 lead as the first quarter closed.
With another three and out for the Dragons as the second quarter began, the Wolves combined a drive by Winbush, Harmon and Johnny Deculit from the backfield and Reed with another reception, all readying Winbush for his second visit to the endzone for a 21-0 lead.
Rayne’s third score of the ballgame resulted from a 60-yard drive on the legs of Winbush, Deculit and Harmon. Winbush punched it through the line within the five yard line for another score. Richard’s extra point saw the Wolves take a 28-0 lead at the four minute mark of the second quarter.
Rayne’s final score of the first half came on a 31-yard touchdown pass from Doucet for Reed’s second touchdown of the game. Richard put up another extra point for a 35-0 Rayne lead for the halftime break for DeRidder’s homecoming ceremonies.
The second half of play saw Rayne’s reserves shut down DeRidder with a 46-yard touchdown pass from Doucet to D.J. Stelly, along with another Winbush touchdown run for Rayne’s 48-0 win.
Winbush lead Rayne rushing with 103 yards on 17 carries during his four-score game.
Harmon had 12 carries for 54 yards, while Deculit recorded 30 yards on six carries.
Finishing up the Rayne rushing were Darion Senegal (2-14), Darrin Wilridge (4-11), Javian Pitts (2-10) and Reed with eight yards.
Complimenting Doucet’s 145 yards in the air were two TD grabs by Reed who finished the night with 5 completions for 99 yards. Stelly’s lone catch for 46 yards produced Rayne’s third touchdown reception.
Leading the Rayne defensive stats was Jamian Evans and Tyreece Beverly each with four tackles and three solos. Darian Richard, Carl Davis and Richard Breaux each recorded three tackles and three solos, with Davis and Breaux turning in a tackle for a loss.
Completing Rayne’s defensive show were Marlon Foreman, Antonio Gabriel, Ron Roberts, Zach Fontenot, Tavares Poullard, Torin Benoit, Johnny Deculit, Jake Richard, Blaze Miller, DJ Stelly, Tony Roberts and Tyler Carriere.
“We played well tonight and they (DeRidder) didn’t, all a direct result of the way our team played both ways,” according to Ware. “We played a complete game and everyone did their job. You name it -- our offense, defense, special teams -- they all played well throughout the entire game.”
With Friday’s big win, Rayne now stands at 7-1 overall. But, the district standings just got interesting. Leesville defeated LaGrange, joining Rayne with a 2-1 district slate, putting in place a possible three-way tie for the 3-4A district crown. Time will tell.
Rayne will return to Wolf Stadium on Friday to host Washington-Marion during another district contest. Kickoff is 7 p.m.