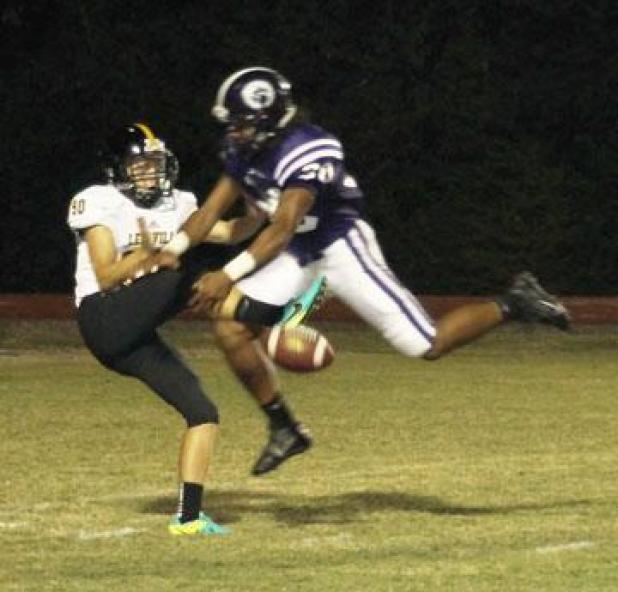 Wolves bounce back with 26-13 district win over Leesville

RAYNE - Bouncing back after a one-point loss is hard for any team during football season. But, the Wolves collected themselves after last week’s 15-14 district loss to LaGrange, dusted themselves off, and hit the field Thursday and claimed a 26-13 district win over Leesville. The win put the Wolves at 6-1 overall and 1-1 in district play.
“When you return after a loss like last week, you really don’t know how your guys will come out the next game,” stated Rayne High Coach Curt Ware following Thursday’s win over Leesville. “I think we were hesitant and still feeling the effects at first, but we quickly stepped it up and got things rolling, especially our defense.”
The Wampus Cats lit up the scoreboard first midway through the first quarter, but it was the Rayne defense that held that score to a feildgoal at 3-0.
An action-filled late first quarter saw both teams hit the scoreboard.
On a punt near the endzone, Rayne’s Tony Roberts got his hands on the ball for a block, which was recovered by Carl Davis for the touchdown. The extra point was wide and Rayne held a short-lived 6-3 lead.
As seconds wound down in the first quarter, Leesville’s Cory McCoy took a handoff and sprinted down the left side line for a 67-yard touchdown. The extra point putthe Wampus Cats ahead, 10-6.
As both teams struggled to find the endzone in the second quarter, Wolf quarterback Donald Doucet found Johnny Deculit with a touchdown pass for a Rayne score. The two-point conversion failed and the Wolves held a 12-10 lead with only two minutes remianing in the first half of play.
But, that was all Leesville need to lineup in the redzone for a Wampus Cat record-breaking 38-yard fieldgoal by Jacob Adams, sending both teams into the locker room with the Wolves just short, 13-12.
“They (Leesville) are not real big, but they are quick,” Ware noted of his opponents. “We had a hard time blocking them in the first half. As the game continued, we kinda wore them down and our defense picked things up.”
“Our guys basically prevented three scoring drives that ended in their (Leesville) red zone,” Ware continued. “They really came through, especially in the second half.”
Rayne opened the second half right out the gate as Trent Winbush hit the right sideline for a 57-yard touchdown run on the first play of the drive. Jaylon Reed connected with Trent Winbush for the conversion on a swinging gate route, placing the Wolves up, 20-13.
The Wampus Cats were able to penetrate  the red zone once again midway through the final quarter, reaching the nine. But, a quarterback sack by Antonio Gabriel and an offensive penalty forced Leesville to turn the ball over on downs to close out the third quarter.
After a three and out by the Wolves, Leesville once again saw themselves inside the ten and knocking on the door of a touchdown. But, Johnny Deculit had another thought with an interception.
A couple of drives later, Doucet found Jaylon Reed in the endzone for a Rayne score. A failed conversion put the Wolves up for the 26-13 win.
“I was glad to see our defense step it up when we needed them to,” stated Ware. “But, we need to be more consistent. Sometimes we wait and play when we our backs are up against the wall. We need that at an earlier stage in the game. It might not provide an exciting game for the fans, but would sure help us.”
Leading Rayne tacklers were Jaylon Reed, Marlon Foreman, Tony Roberts and Zach Fontenot. Reed had four tackles with 3 solos, while Foreman, Roberts and Fontenot had 3 each.
Finishing off the Rayne defenders were Trent Winbush, Johnny Deculit, Jamien Evans, Darien Harmon, Torin Benoit, Tyreece Beverly, Darrin Wilridge, Grant Trahan and Antonio Gabriel.
When asked about Rayne’s throwing game late in the ballgame, Ware noted, “We were wanting to throw earlier and stay ahead of the change. We then had a chance to make a big play with a couple of catches and it worked. That last touchdown was a good throw and good play for both our guys -- worked great.”
In the air, Doucet recorded four completions for 91 yards and two touchdowns.
Rayne receivers on the night were Jaylon Reed (2-for-54 yards, 1 TD), Darien Harmon (1-28) and Johnny Deculit (1-9, 1 TD).
Of Rayne’s 175 rushing yards, Trent Winbush led the Wolves with 25 carries for 132 yards and a touchdown. Johnny Deculit was 8-for-43 yards, while Darien Harmon was held to 12 carries for 28 yards.
“They (Leesville) really held Darien down on yards tonight,” Ware noted. “He is usually good for at least 100 yards, but their defense stepped it up on him all night. Just glad we had good games from our other leaders.”
“This was a mature win for us,” Ware concluded. “They made us work hard for this win. I told our guys at halftime that if they wanted this win they would have to take it, Leesville was not going to give us anything. They composed themselves and pulled out the win. Something you like to see as a coach.”
The Wolves will hit the road this week traveling to DeRidder for another district contest. Kick-off is at 7 p.m.