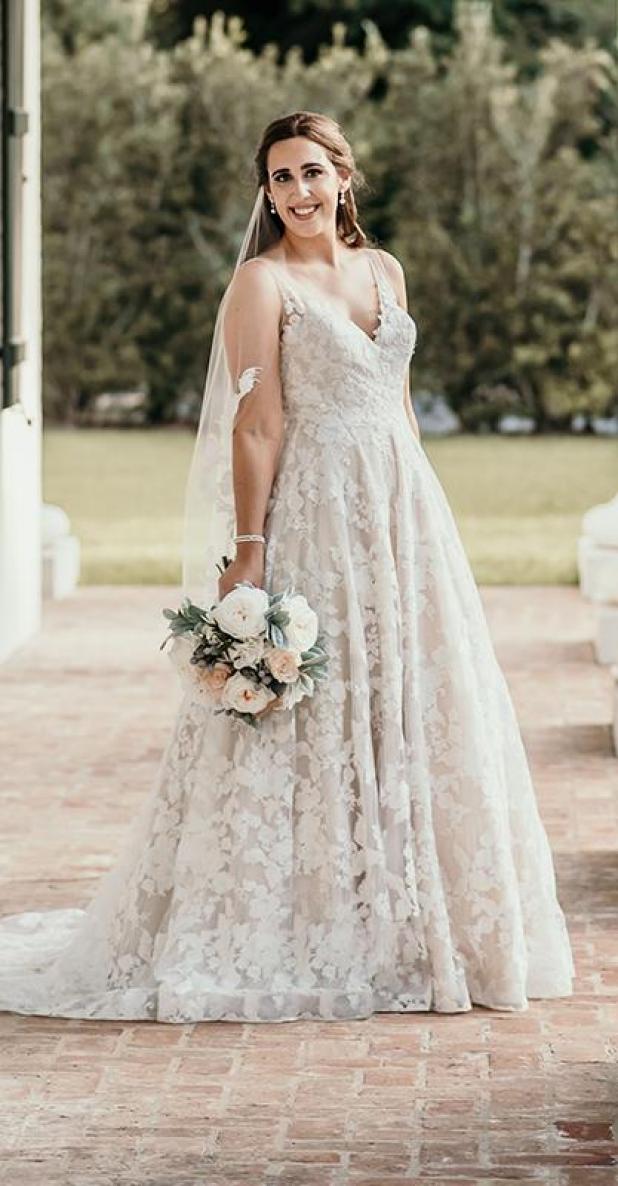 The daughter of Patrick and Kelli Zaunbrecher of Roberts Cove was married on August 1, 2020, at 5:30 in the evening at Acadian Village’s New Hope Chapel.
Pastor Roderick Merritt officiated the intimate ceremony.
Miss Catherine Zaunbrecher was married to Daniel Mark Waldron, son of Ms. Susan Verdun of Pearl River.
A violin and cello duo presented the program of music prior to the service. The grandparents and mother of the bride entered to the song “Perfect” by Ed Sheeran. “Marry Me” by Train was played for the entrance of the attendants, and “Can’t Help Falling in Love With You” by Elvis Presley was played for the bridal chorus. The recessional song was “I’m Yours” by Jason Mraz.
The pews were denoted by elongated quicksand roses, hydrangea, thistle and dusty miller. The altar was adorned with tall floral arrangements of white and quicksand roses, white hydrangea, brunia berries, dusty miller and thistle. The Acadian Village grounds were dressed with decorative pieces that included a “C & D” wooden sign and a sign with lyrics to one of the bride and groom’s favorite songs.
The father of the bride, Patrick Zaunbrecher, gave his daughter away in marriage. Catherine Zaunbrecher wore a gown of champagne satin covered with ivory Italian lace. The neckline was in a V-neck design and defined with lace, which flowed into a princess style bodice.
She wore a silk illusion, chapel length veil which was outlined in Italian lace. Above the veil was a hair comb with silvery white flowers.
She carried a hand-tied bouquet of white garden roses, quicksand roses, white hydrangea, brunia berries, dusty miller and thistle.
She used a handkerchief that her mother carried in her wedding bouquet as her something old and borrowed; her wedding dress, something new; and the traditional garter, something blue. The bride was given six pence by her mother.
Her attendants included Victoria Zaunbrecher, maid of honor, Azizza Darwish and Courtney Robertson. The attendants wore long, flowing gowns of sage green silk. Each attendant carried a bouquet of quicksand spray roses, thistle and greenery.
The ring bearers were Archer McGuire and Noah Sonnier. The ringbearers wore corn husk blue pants with a white button-down shirt. The shirt was framed by a sage green suspender and bow tie, which were gifts from the bride and groom.
Mr. Daniel Waldron had Mickey McGuire as his best man, and Mitchell Williams and Chris Meche were his groomsmen. The usher was Dillon Hayes, cousin of the bride. The groom wore a blue corn husk suit with a matching vest. He also wore a sage green tie with a special stitched note from the bride in the inside of the tie. The groom had a boutonniere of quicksand spray rose, thistle, succulent and greenery. The groomsmen and the usher wore blue corn husk suits with sage green ties. The father of the bride worn a navy suit, along with a striped sage green tie that included a note from the bride stitched inside.
The bride and groom wrote and shared their personal vows during the ceremony.
The mother of the bride wore a long, flowing satin dress covered in champagne colored netting. The scoop neck dress was adorned with embroidered flowers in soft colors.
The reception, which immediately followed the wedding, was held at The Warehouse in Rayne. The bride’s wedding cake was a three-tier round cake with fresh flowers placed perfectly on the cake. The cake sat on a marble and wood stand designed by the bride’s father. The groom’s cake was a golf-themed cake, which included a golf course design and strawberries dipped in chocolate surrounding the cake.
Guests registered in a handmade and hand-painted guest book created by the bride’s grandmother, Margie Harmon. The bride’s grandmother also handmade the money bag that included a special prayer stitched in the bag.
The couple enjoyed a honeymoon in Wilmington, North Carolina, and will reside in Lafayette.
Catherine Zaunbrecher received a bachelor’s degree in accounting and a master’s degree in public administration from Louisiana State University.
Daniel Waldron received a bachelor’s degree in accounting from the University of Louisiana at Lafayette.