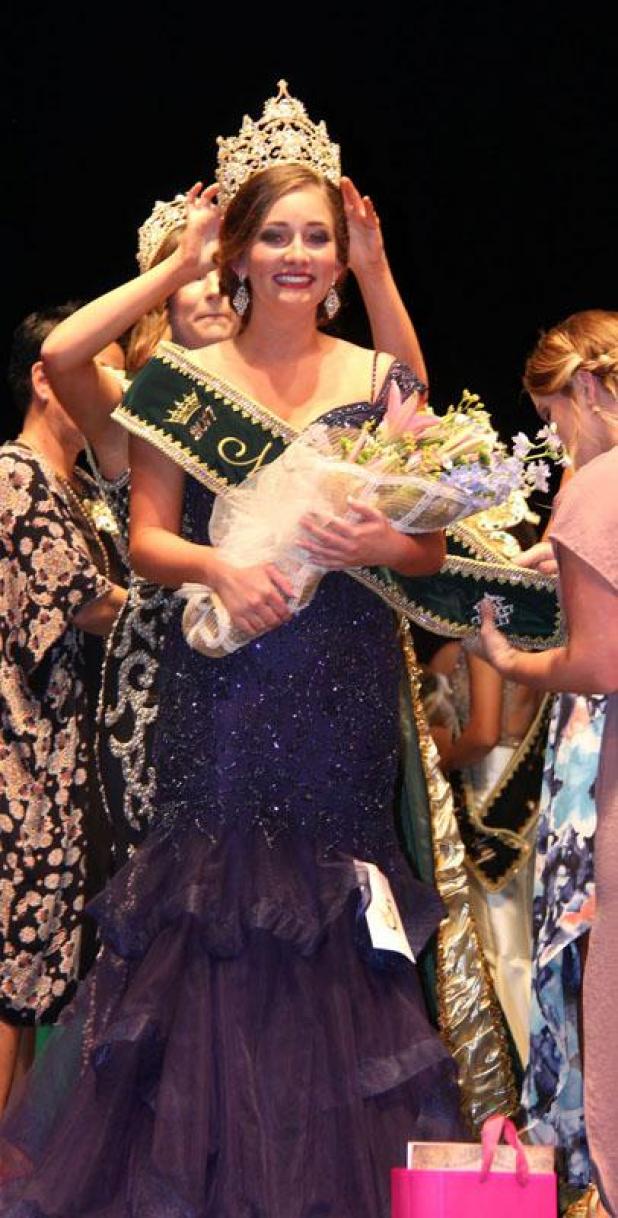 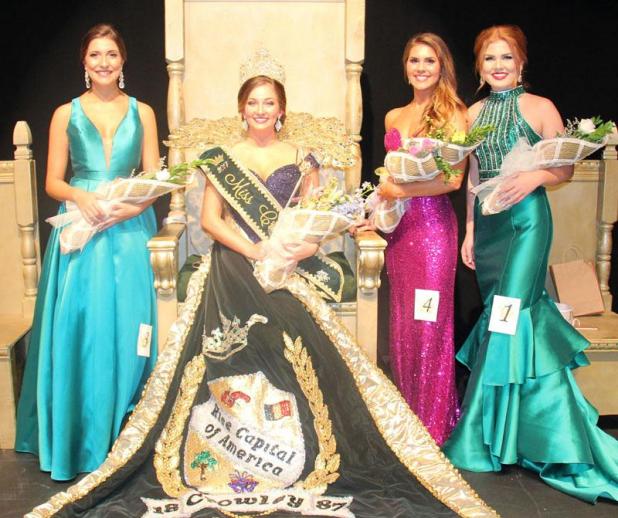 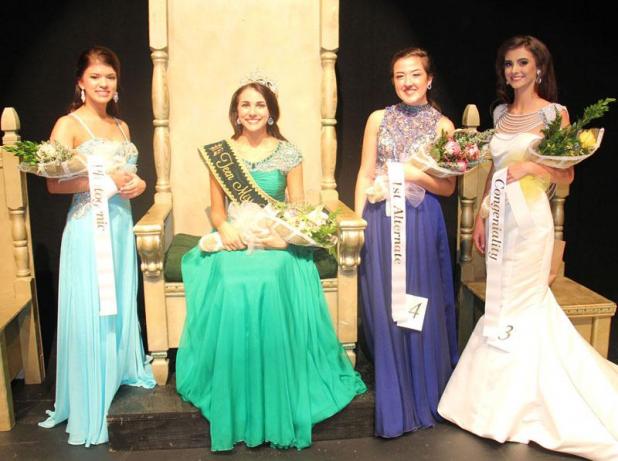 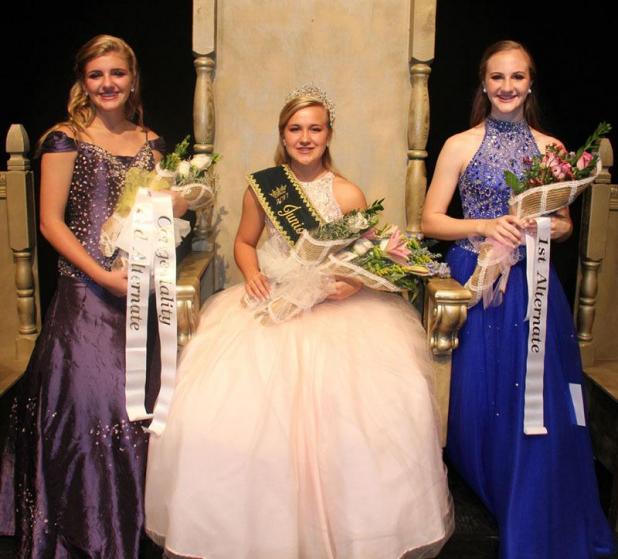 The Grand Opera House was filled with beauty and glamour last weekend as it served as the venue for the 2017 Miss, Teen Miss and Junior Miss Crowley Pageants.
The Miss Crowley Pageant, hosted by the Crowley Professional Women’s Club, celebrated its 81st year on the evening of Saturday, July 29.
Miss Victoria Marie Callahan, whose sponsor for the evening was Boutique 46, was crowned as the newest Ambassador to the Rice Capital of America, Miss Crowley 2017, by Miss Crowley 2016 Kathryn Shea Duncan. She was presented with a crown donated by Dugas, Soileau & Breaux and a banner donated by Dr. and Mrs. Max Trahan. She will serve as the City of Crowley’s Ambassador to the 2018 International Rice Festival.
Victoria is the 19-year-old daughter of Michael and Angela Callahan. A 2016 graduate of Crowley High School, Victoria is currently attending Blue Cliff College majoring in nursing.
Her court included first runner up, Katelyn LeBlanc, who was sponsored by Crowley CrossFit Unlimited, and her second runner-up, Brooke Comeaux, who was sponsored by Lyons Point Country Store.
Her court members will represent the City of Crowley at an area festival of their choice.
Taking the crown as Teen Miss Crowley 2017 was Madison Sittig, who was sponsored by Puddles & Lace.
Being crowned by 2016 Teen Miss Crowley Jessica Clayton, Madison is the 15-year-old daughter of Jude and Debbie Sittig. She is currently a student at Iota High School.
Her new crown is compliments of Mike and Rhonda Bussy, owners of Ruddock’s Bakery. Her banner was donated by Mitch Hollier and State Farm.
First runner-up for this year’s pageant in the Teen Division was Taren Adams, who was sponsored by Bank of Commerce.
Reigning as Junior Miss Crowley for the year 2017 will be Alexis Romero. She was crowned by Junior Miss Crowley 2016 Kailey Hollier and given a crown and banner compliments of Sheriff K.P. Gibson. Her sponsor for the evening was La Belle Vie Salon.
Alexis is the 14-year-old daughter of Brandon and Danielle Romero. She will be a Crowley High School Sophomore for the 2017-2018 school year.
Her court included first runner-up, Madline Foster, sponsored by Rice City Gymnastics, and her second runner-up, Bailey Sittig, who was sponsored by Sittig Mobile X-Ray.
In addition to the crowning of the newest royalty, there were also awards given for Miss Congeniality and Miss Photogenic.
Miss Congeniality for the Junior Division was Bailey Sittig, taking the honor in the Teen Division Mary Kaitlyn Simon, who was sponsored by Nero’s Lawncare, and Katelyn LeBlanc received the award among the Miss contestants.
Receiving the award for Miss Photogenic in the Junior Division was Alexis Romero, in the Teen Division was Mikayla Clayton, who was sponsored by Fezzo’s, and in the Miss Division was Maci Stroderd, who was sponsored by Gatti’s.
Those contestants vying for the title of 2017 Miss Crowley were eligible to participate in the scholarship competition. The winner of the $1,000 Billie Ruth Memorial Scholarship was Katelyn LeBlanc.
The evening was emceed by Mayor Greg Jones and Tessa Leleux Richard. Mayor Jones also offered his remarks and presented a key to the city to outgoing Miss Crowley Kathryn Shea Duncan, and representatives of the 81st International Rice Festival spoke of the upcoming festivities.
Also on hand to congratulate the 2017 queens were Miss Crowley title holders from years past and visiting queens from Louisiana’s fairs and festivals.
Shortly before the crowning of the new royalty, 2016 Miss Crowley Kathryn Shea Duncan, who will be the City of Crowley’s representative to the 81st International Rice Festival in October, offered a farewell speech and spoke of her reign.
Other contestants competing in the Junior Division were Raina Buldoc, who was sponsored by Mary Ann’s Flower Shop, and Faith Hayes, who was sponsored by Evangeline Bank.
The 81st Miss Crowley contestants also included Amber Vincent, whose sponsor for the evening was First National Bank, and Katie Boullion, who was sponsored by AFC Towing and Recovery.
Immediately following the pageant, the new queens were honored at a ball held at Le Grand Hall, where guests enjoyed delicious catering by Rice Palace and entertainment by Colby Latiolais & Ambush.
Special thanks go out to all the many businesses and individuals who devoted their time, talents and generosity to the pageants, including the staff of the Grand Opera House and Kim Gielen, Encore Healthcare & Rehabilitation, Southwind Senior Suites, Southwind Healthcare & Rehabilitation, Boutique 46, the Vanilla Bean, Gatti’s Pizza, Red Barn, Stage, Old Tyme Café, Puddles & Lace, La Belle Vie Salon, Crowley CrossFit Unlimited, the Crowley High School football team, Charlotte Jeffers and Mark Miller.