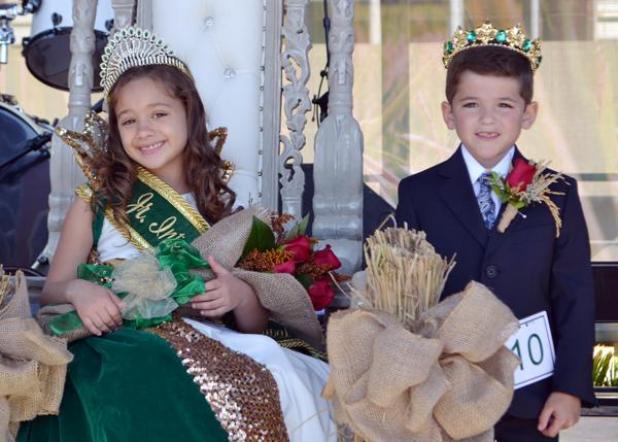 From left, Malari Navarre and Cory Fruge Jr. were crowned as the 80th International Junior King and Queen Friday morning. Navarre is a South Crowley Elementary second grader and is the daughter of Bobbi and Lawrence Navarre. Fruge, a second grader at Iota Elementary, is the son of Cory Fruge Sr. and Amanda Fruge.

Just call it a family tradition for the Navarres with little sister Malari Navarre being crowned the Junior Queen of the 80th International Rice Festival by her sister, 2015 queen Emmy Navarre.

Malari Navarre along with Iota Elementary’s Cory Fruge Jr. were crowned the Junior Queen and King, respectively, in front of a loud and eager crowd Friday morning to begin Children’s Day at the festival.

Hosts for the contest Antoinette Pete and Shelly Godeaux welcomed the crowd and introduced the 36, in total, contestants as the six judges had the difficult task of whittling 36 down to 16 and then down to six before finally only a junior king and queen remained.

Navarre is a second grader at South Crowley Elementary. She is the daughter of Bobbi and Lawrence Navarre. Fruge is also a second grader. He attends Iota Elementary and is the son of Cory Fruge Sr. and Amanda Fruge.

The junior royalty not only received the savings bonds provided to all princes and princesses, presented by Office Centre/Teacher’s Pet, and trophies, presented by JC and Suzy Webb. But, this year for the first time, the two junior royals each received a scholarship, sponsored by Lake Felix RV Park.

The royalty also welcomed a court to their royal party with second and first runners-up named.

Chosen as first runners-up were Grant Harrell and Kate Trahan. Harrell, a first grader at Mermentau Elementary, is the son of Dusty and Kristy Harrell. Trahan is a student at Rayne Catholic School. She is the daughter of Annie Trahan and Ryan Trahan.

Selected as second runners-up were Jakob-Paul Dupont and Brylee Thibodeaux. Thibodeaux is the daughter of Amy and Brandon Thibodeaux. She is a first grader at St. Michael School. Dupont is a student at Martin Petitjean Elementary and is the son of Paul and Paige Dupont.