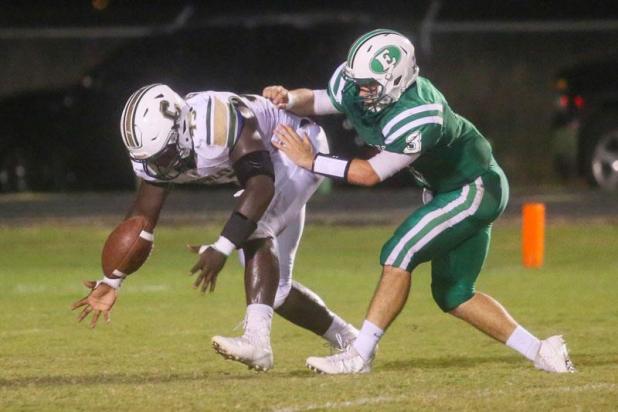 It was another night of big plays for the Crowley Gents Friday in their District 5-3A opener at Eunice.
This time, however, the biggest plays were turned in by the CHS defense.
The Gents logged two interceptions, returning one for a touchdown, blocked a punt and returned it for another score and limited the hosts to just 101 total yards in a surprisingly easy 39-0 victory over the Bobcats.
“Our defense played well,” said CHS coach Jeptha Wall, whose squad improved to 3-1 with the victory. “They (defense) finally got that shutout. We had two big interceptions early on and we never really allowed them (Eunice) to get anything going.”
Not only did the Bobcats barely break the 100-yard mark, but they logged just three first downs the entire night.
The Bobcats crossed midfield just twice and both times were in the first half.
Eunice got to the CHS 44-yard line on their second series of the game, but a holding call and a tackle for a loss sent them back on their side of the field. Then on second down and long, quarterback Jaden Brasseaux made his second mistake in as many series.
After being intercepted by Josh Burnett on the Bobcats’ opening series, Brasseaux went back to the air and this time, it was costly.
Jalean Jenkins was the culprit this time, making a leaping interception at the CHS 48 and returning it 52 yards for the Gents first touchdown of the game.
Marquis Garrett, the Gents’ starting quarterback, then hit Demarcus Dioron in the end zone for the two-point conversion to put the visitors up 8-0.
“Jalean is just so long,” said Wall. “And actually, the rout was open, but Jalean made a great leaping play.
“That was a big boost right there and it kind of gave our defense a little confidence. We started seeing the Buck and the G a little bit better and our linebackers started hitting a little bit better.”
The Gents’ offense added to that lead midway through the second quarter after starting their 11-play drive at their own 28-yard line.
An offsides on the Bobcats on fourth-and-1 gave the Gents some life.
Eunice looked to have the Gents in a bind after a tackle for a loss and a holding call had Crowley facing a third-down-and-21 situation.
That wasn’t the case, however.
Garrett calmly fired a 32-yard pass to Dioron for the improbable first down and four plays later, Donald Francis hit pay dirt from four yards out. Garrett went to the air again on the two-point conversion and hit Rapheus Joseph for a 16-0 advantage with 7:59 remaining in the half.
Garrett completed five passes for 67 yards on the night.
“I though Marquis played really well tonight,” said Wall. “He looked pretty good. He overthrew one or two, but that’s going to happen. He’s starting to get more confidence and he’s really coming around.”
The Gents added yet another big play a little over a minute later when Desmond Harmon broke through the line and blocked a punt. He then scooped up the loose pigskin and scored from eight yards outs. Joseph pushed the lead to 24-0 on a sweep to complete the two-point conversion.
“We weren’t even trying to block the punt, but Dez just broke through there and got a hand on it,” said Wall.
The play was Harmon’s biggest highlight of the night, but it wasn’t his only big play.
The All-District performer also had a pair of sacks and multiple stops for losses. He even got in the offensive backfield for the Gents in the third quarter and rumbled in for a 2-point conversion following a 1-yard touchdown run by Keith Wilson.
“You know he (Harmon) has a pretty good night when the umpire wants to talk to you about him,” said Wall with a giggle. “He was asking what grade his was in and stuff like that.
“I though he and Kendall Harmon (Demsond’s brother) both had a pretty good night.”
With the Gents’ defense taking center stage, their offense had just 124 total yards at the half with 57 of those yards coming on the ground.
The second half was the opposite.
Wilson, who played the bulk of the first half on defense, picked up 67 yards on seven carries during the Gents’ first two series. He was Crowley’s leading rusher with 12 carries for 93 yards and a touchdown.
Obadiah Butler added the Gents’s final touchdown of the night early in the fourth quarter when he broke free for a 48-yard score.
Butler finished with 85 yards on 15 carries.
Crowley’s Wyatt Stelly then connected on the Gents’ first PAT of the season for a 39-0 lead.
The Gents converted all four of their two-point conversion attempts and Stelly’s PAT kick was the first successful attempt on the season.
In all, the Gents racked up 305 total yards, 181 coming on the ground in the second half.
“They gave us a little trouble up front and we didn’t move the ball that much in the first half,” said Wall. “They (Eunice) gave us a look that we weren’t sure that we would see, but we made some adjustments and were able to run the ball a little bit more efficiently in the second half.”
The victory was the Gents’ third straight and is a big boost heading into next week’s Homecoming showdown against Northwest, which defeated Iota Friday, 34-19.
“We’ve been fortunate and I think we’re starting to build some pretty good momentum,” said Wall. “We’re going to need it against Northwest.”