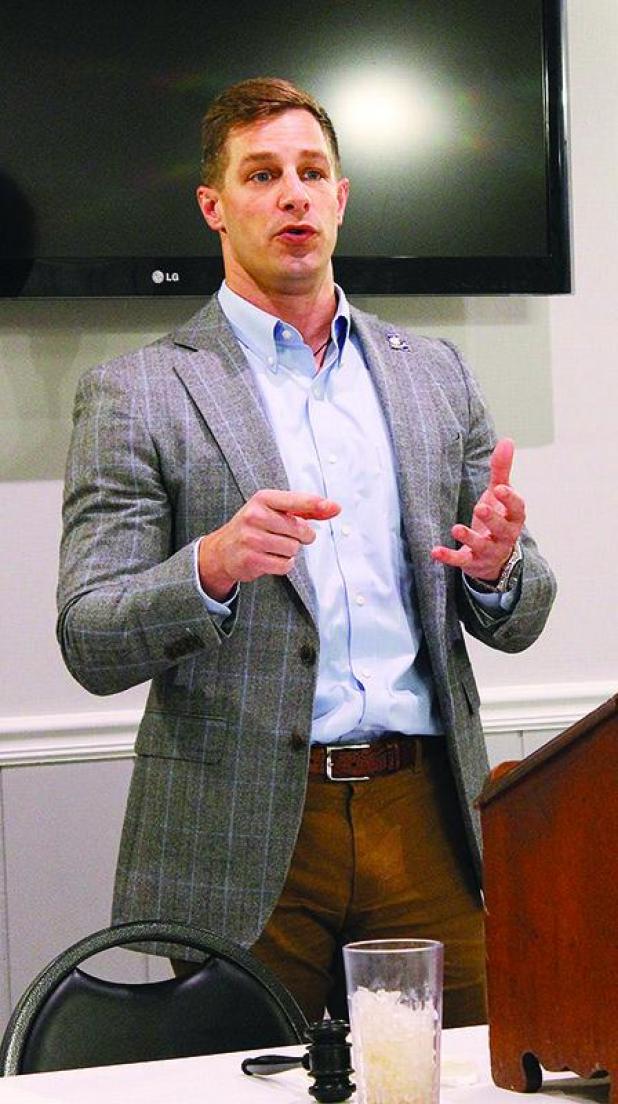 THE POST-SIGNAL / Steve Bandy
State Rep. John Stefanski, R-Crowley, spoke to the Crowley Lions Club Tuesday about highlights of the regular and two special session of the Legislature held this year.

Between the COVID-19 pandemic and the onslaught of hurricanes, the Louisiana Legislature has been busy this year.
Starting with the Regular Session, which started in February and was promptly interrupted by the coronavirus, Rep. John Stefanski said a lot of good things have come out of Baton Rouge this year.
Stefanski updated the Crowley Lions Club Tuesday on some of what he considers key legislation passed in 2020.
Concerning the last special session, Stefanski explained the legislation aimed at curtailing Gov. John Bel Edward’s emergency powers.
“We just wanted some input and some explanations,” he said. “We kept asking for a seat at the table and the govern kept rebuffing us.”
HB4 would have given the legislature the authority to act on gubernatorial declarations 30 days after they were imposed. The bill, however was vetoed by Edwards.
That’s when the House leadership petitioned to set aside the declarations for seven days.
“We just wanted to see what would happen,” he said. “Would people go crazy or would they continue to follow the safety measures.”
However, a judge ruled that the petition had to come from both the House and the Senate and, since only the House of Representatives had adopted it, it was ruled unconstitutional.
“And the Senate wanted no part of it,” Stefanski added. “They had no interest in the petition at all.”
But that’s not all the legislature did, Stefanski continued.
“We passed a lot of hurricane recovery bills,” he said. “We did our best to protect our businesses and help the hurricane-ravaged areas of the state.”
Referring back to the regular session, Stefanski explained that, outside of some capital outlay funding for projects in Acadia Parish, one of the major pieces of legislation was passage of limited liability for businesses and schools reopening after the pandemic.
“A lot of business owners were afraid that they would be held responsible if somebody came into their place of business and ultimately contracted COVID,” the Crowley Republican explained. “This act holds them harmless provided they follow reasonable safety measures.”
The CARES Act and tax rebates for “front-line workers” were other highlights Stefanski touched upon.
“If we get another allocation of federal money, I hope to look at something for the bars, restaurants and hotels that have been hit really, really hard by this pandemic,” he said.
On a somewhat related matter, he reminded of the Tax Free Weekend to be observed Nov. 21 and 22.
“That’s designed to help with hurricane relief,” he said. “There will be no state tax charged on purchased up to $2,500.”
One measure he was particularly proud of was the civil justice reforms measures passed by the legislature.
“I carried that legislation and its going to make significant changes to personal injury laws that will hopefully bring our insurance costs down,” he explained.
The state’s medical marijuana guidelines also were “greatly expanded” this year, according to Stefanski.
“Used to be, only certain doctors could prescribe medical marijuana and only for certain conditions,” he said. “Now, any doctor can prescribe it for anything he or she considers debilitating.”
There are still some hurdles, he added, such as the fact that possession of marijuana — even medical marijuana — is still considered a federal crime. “Also, the presence of medical marijuana in your blood stream can still probably get you in trouble with your employer,” he added.
Turning to the upcoming budget, another shortfall is expected next year.
“I think it could be as high as several hundred million,” he said. “And what’s bad is that higher education and healthcare are the two funds that are always the hardest hit because everything else is dedicated.”