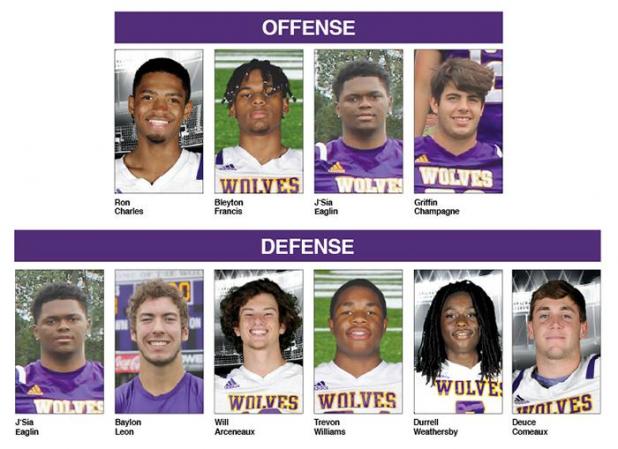 RAYNE - During a football season like 2020, both players and coaches, alike had never experienced anything even close to the actions and reactions of the coronavirus pandemic.
In addition to no spring training and limited summer workouts, Rayne High, like all other football teams, were looking into the unknown on many levels, even worried about not having a season at all.
But, as COVID-19 was better understood, schools were given rules and regulations to follow, and the football season began -- better late than never.
“When you consider the limited time we were able to get on the field and work on our game, I think we did pretty good,” stated Rayne High head football coach Kaine Guidry of his Wolves.
“We came a long way in a short amount of time with our guys working hard and giving it their all.”
The Wolves finished shy of where they wanted to finish their abbreviated season with a 3-5 season record.
However, with their strength of their shortened season and their strong district, the Wolves were able to slip into the state playoffs as the No. 30-ranked team; afterwhich, they met No. 3-ranked Tioga in the opening round, cutting their post-season short with a first round loss.
For their consistent play, especially in district, nine Wolves were named during the 4-4A All-District selections.
Guidry noted, “Due to the absence of Lagrange and Washington Marion this season after their school received so much hurricane damage, the district decided on selecting only a first team this year.
“We were well represented and will definitely miss those seniors that are graduating.
“I think the guys who were selected are very deserving,” stated Guidry. “We had a core group of seniors that we tried to build this season around and it’s nice to see those guys get the recognition that they deserve.”
On the offensive side of this year’s selections representing Rayne High were Ron Charles, J’Sia Eaglin, Griffin Champagne and Bleyton Francis.
Running back Ron Charles led Rayne High rushers this season with 839 total rushing yards on 157 carries. He scored 10 touchdowns for the Wolves during his senior campaign.
Charles was joined by Jeoul Hill and Deon Ardoin of Eunice at the running back selections.
Ardoin was also selected the district’s MVP with 111 carries for 976 yards and 12 TD’s.
Offensive linemen J’Sia Eaglin (junior) and Griffin Champagne (senior) provided protection for the Rayne High backfield to make their plays and were chosen in two of the five spots on the All-District line.
Completing the offensive line selections were Eunice’s Kevontdraay Savoy, Dylan Darbonne and Samuel LeBlue.
At the wide receiver position, Ethan Guidry of North Vermilion and Dylan Guillory of Eunice were the two honorees, while Eunice quarterback Simeon Ardoin was tagged in that slot for All-District honors.
Rayne High junior Bleyton Francis was selected as the 4-4A’s Athlete of the District. He collected 155 rushing yards on 39 carries, while also tallying 89 receiving yards on five receptions totaling five touchdowns.
The district’s place kicker was Eunice’s Braden Rider, while Rontrel Broussard of North Vermilion was selected the district’s return specialist.
Wolves selected on the district’s defensive side were Trevon Williams, Baylon Leon, Durrell Weathersby, Will Arceneaux, Deuce Comeaux and J’Sia Eaglin who was honored with a double selection on both sides of the line.
Eaglin’s defensive skills were also honored as he tallied 10.5 tackles per game, along with six tackles for a loss and two quarterback sacks.
Eaglin’s co-defensive lineman, Trevon Williams, was also selected on the defensive team. Williams collected 20 tackles, 18 solos and two tackles for a loss during his junior campaign.
Completing the defensive line honorees were Kevontdraay Savoy and Myles Woods, both of Eunice.
Senior linebacker Baylon Leon was named in defensive selections as he contributed 25 tackles, 18 solos and four tackles for a loss during his senior season.
Joining Leon in linebacker selections were Jacoby Collins, Dedric Vigers and Hayden Darbonne, all of Eunice.
The defensive back senior duo of Will Arceneaux and Durrell Weathersby were also named during All-District selections.
Arceneaux completed his high school career with 30 tackles, 28 solos, two tackles for a loss, seven pass breakups and two interceptions, while teammate Weathersby collected 20 tackles, 13 solos, one tackle for a loss, 13 pass breakups and three interceptions.
Completing the district’s defensive back selections were Ethan Frederick of North Vermilion and Jahiem Mitchell of Eunice.
Rayne High junior Deuce Comeaux was again tagged the district’s punter for the second year in a row with a 39-yard kicking average.
The district’s defensive MVP, Dedric Vigers, is from the district’s title holders, Eunice High.
Looking back at the hectic 2020 season, Guidry noted, “As for as how the season went, I think that we’re in the stage of our program -- in year two with the new staff -- it was critical that we had a normal off season. Not getting that accomplished clearly put us behind a little, as all other teams can agree.
“But all in all, the kids continued to fight adversity every week with a brutal schedule and a lot of inconsistency throughout the entire season.
“I thought at times we played really well and we beat the teams we were supposed to.
“If you look at the crushing, double overtime loss to Eunice -- picture that going our way -- like it very well could have; then, maybe the rest of our season turns out a little different.
“We, like many other teams, we are ready to put this one behind us and start preparing for 2021.
“We are excited about the off-season and the group of kids we have returning. Time will tell when we can hit the field again and get things started on the right foot -- I hope.”