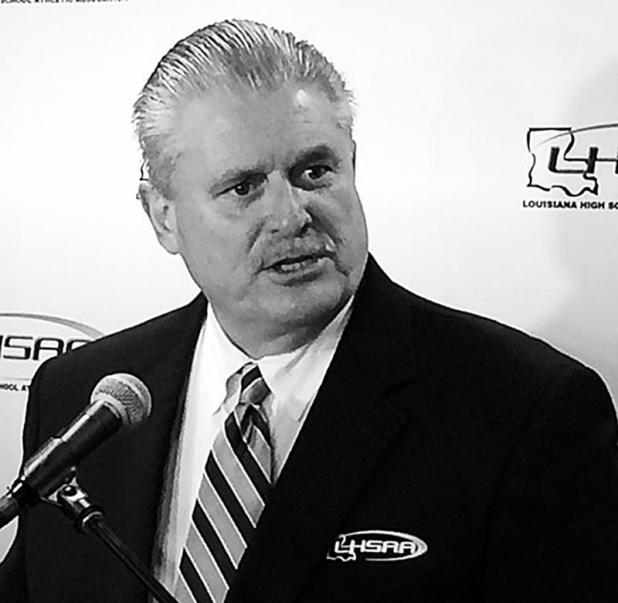 Louisiana High School Athletics Association Executive Director Eddie Bonine has finally reacted to the recent formation of the new Louisiana Select Association.
The LSA was formed Monday by members of the state’s Select schools. The group is part of the LHSAA and last January it split from the LHSAA to form its own championships format for football, basketball, softball and baseball.
After the results of Monday’s meeting were released, Bonine, who has been wary of separate championship events and the formation of the LSA, released his response.
“The Louisiana Select Association is not a recognized LHSAA sub-group, nor are they an actor of such, nor the equivalent of the Louisiana High School Coaches Association, Louisiana High School Athletic Directors Association nor the Louisiana High School Officials Association,” Bonine said in a written statement.
“All of these entities are approved, recognized and protected in the LHSAA Constitution as those representing the entire association. As time is now of the essence, the formation of the LSA is simply a necessary means to address the organizing and administering of select school postseason events.”
That is something LSA CEO and Catholic High of Baton Rouge athletic director J.P. Kelly said the group understands.
“We’ve had conversations about this with Mr. Bonine,” Kelly told the Baton Rouge Advocate. “The most important thing now is to have structure in place for the championship events that we are in charge of hosting. In order for the LSA to be formally recognized by the LHSAA, there would have to be a January vote of the entire membership.”
In June, the LHSAA’s 26-member Executive Committee, representing 404 public and private schools, some 10,000 coaches, 415 plus athletic directors and over 5,000 game officials, voted unanimously to support the LHSAA and its staff in the preparation of a process to return the association to a resemblance of itself prior to the 2013 annual convention.
It was at that January convention that the group voted to approve the select/nonselect split in the sport of football. The split for basketball, baseball and softball was implemented in 2016-17.
Presently, an active interest survey is out among the member schools that could be crucial in an attempt to unify the LHSAA’s select/nonselect schools.
The survey terminates on Friday, Aug. 9. At that time, the LHSAA will extract, culminate and review the survey data in hopes that the results will provide necessary and valuable outlooks moving forward and will assist in avoiding any and all potential distractions.
“It is unfortunate it has taken the select school membership since January to organize, and equally as unfortunate the launch of the LSA has happened while an active survey is in the hands of the membership, where it just happens one of the survey options is two distinct and separate associations,” continued Bonine in his statement. “The LSA formation structure presented promotes perceptional optics not conducive to LHSAA unification.”
During Monday’s meeting, Kelly also said that the LSA would seek sponsorships that do not conflict with LHSAA sponsors to help offset the Select title-game expenses.
But an email from Chuck Schmidt, vice president and general manager of the Prep Division of OUTFRONT Media, the company that has taken over marketing and sponsorships for the LHSAA, took Kelly and the LSA by surprise.
Schmidt informed the LSA that OUTFRONT is the only entity with the rights to sell sponsorships for all LHSAA events and attempts by anyone else to sell sponsorships will lead to legal action.
Kelly, who was unaware of OUTFRONT’S relationship with the LHSAA, said, “It certainly sounds like something that will be very good and benefit all the LHSAA’s events and schools”.
“We (LSA) only discussed sponsorships because we thought we would be responsible for handling that area for the select events. Now we know that is not the case.”