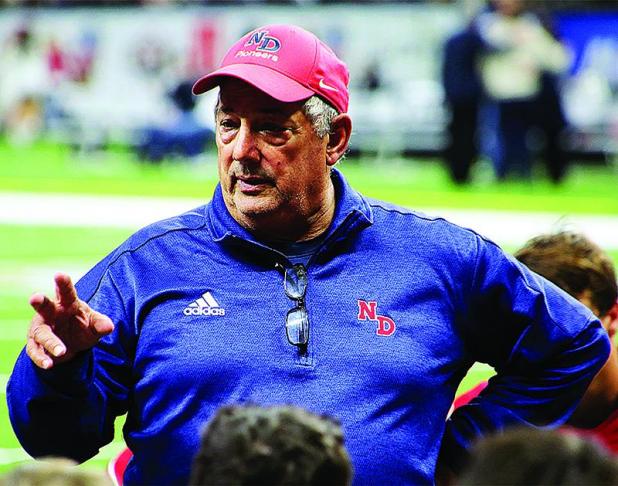 Notre Dame head football coach Lewis Cook says Monday’s meeting of Louisiana’s Select high school representatives at Teurlings Catholic was a positive step forward for the group’s 108 members as they head into the 2019-20 school year.
“It gives us strength as a group,” said Cook, who was one of 71 members representing their respective schools.
The meeting was called by Teurlings principal Mike Boyer in the wake of last January’s breakaway from the Louisiana High School Athletic Association’s state championships structure.
The split, which was voted on by Select and Non-Select members, allows Select teams to host their own championship events, including in the sport of football, which had traditionally been played in the Louisiana Superdome.
Select schools, who on Monday formed the Louisiana Select Association, were concerned that under the previous structure, some schools were actually losing money by playing their championship games at the Superdome.
Notre Dame was one of them.
“During some of our trips to New Orleans, the money received from the game didn’t cover the expenses of getting everyone there,” said Cook.
For Cook, things got especially frustrating after the 2017 championships when the LHSAA failed to pay the scheduled guarantees to the Pios and their opponents, the Catholic High of New Iberia Panthers.
That was $7,000.
Coincidentally — or not — Cook said he received a check for that amount from the LHSAA several weeks ago.
For teams like Cook’s Pios, the difference in playing in the Superdome with all the limitations placed by the LHSAA or playing a championship game elsewhere can be substantial.
“Just take that game between us and Catholic High two years ago for instance,” he said. “We each sold 1,500 tickets prior to leaving for New Orleans ($15 each) and say we sell another 2,000 that’s $75,000.
“If we had played that game at, say, Cajun Field, we would have sent the LHSAA 10 percent ($7,500), paid expenses and we would have probably split $60,000 between us.
“And that’s just selling 5,000. If there were 7,000, and I think the area would supply that, we’d have each gotten about $50,000.
“Heck, if we’re not going to play in the dome, that kind of money would be a good consolation. “
Monday’s meeting was not, as some feared, a first step in breaking away from the Louisiana High School Athletic Association, but instead was to set up a sub-organization, which members did in forming the LSA.
The LSA’s purpose will be to focus on administering championship events for the the group — period!
“It’ll be like the Louisiana High School Officials Association and the Louisiana High School Athletic Directors Association: you’re still a part of the LHSAA,” he explained.
The group, Cook said, will look at championship events in the sports split along the Select/Non-Select guidelines, which involve five sports — football, boys and girls basketball, baseball and softball. All other sports have combined championships which include both groups.
“We had to do something: we’re only one-third of the organization and by doing this, we’re united with a unified voice,” said Cook.
“We don’t know what’s going to happen in the future. In fact, there’s a proposal to bring all the schools back together that will be brought up at the January meeting; so the separate championships may only be a one-year deal.”
Cook said the biggest question facing the group at this point is what to do about the football championships. More specifically: Where will they be played?
In January, there was talk of two options: 1) playing all games at a common site, and 2) the higher seeded team hosting its championship game at a site of its choosing.
Monday, representatives voted to pursue the first.
“We were told that some possible sites are Tulane, Southeastern, the University of Louisiana and, yes, even the Superdome!” said Cook.
“I’m pretty sure we’re not going back to the Superdome, though.”
Rental fees for the Superdome would make that facility a non-starter, he said.
As far as Cook is concerned, the most attractive place for the Pios, who have been to the championship game 10 times, would be UL’s Cajun Field if Notre Dame were to make it to the title game again.
He may get his wish.
Tim Sensley of Highland Baptist gave a report Monday and told the group that UL would allow Select teams to host events at Cajun Field at no charge, although the LSA would have to pay for security and other expenses.
“That sounded good to me,” said Cook. “Plus, we could go out and get our own game sponsors and things like that, which would increase the revenues even more.
“The thing about this new setup is that it opens up all kind of possibilities. Think about it: This could develop into something like the SEC (Southeastern Conference) where Alabama wins the national championship and all the schools in the conference, like Vanderbilt, get a check. So some (Select) teams that don’t even make the playoffs could wind up with, say, a $1,500 check; and the ones that play and win get even more.
“Like I said, there are a lot of possibilities going forward.”
Ideally, however, Cook would like to see the whole Select/Non-Select format scrapped.
Blown up, actually.
“I’d love for us all (schools) to be back playing together,” he said. “Like last year: a Notre Dame-Amite match-up would have been a heckuva game, not that the Notre Dame-Catholic High game wasn’t.
“But.......
“I’m just saying.”