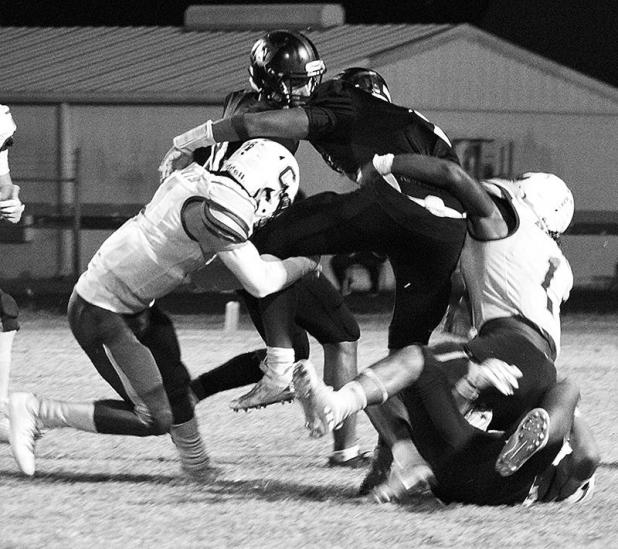 THE POST-SIGNAL / Sophia Fontenot
Crowley High’s Nick Williams (4) and Jonkeyvon Marks (1) bring down a Northwest running back last week during the Gents’ 20-6 loss to the Raiders. The Gents will play host to Marksville on Friday at 7 p.m.

When the Crowley Gents take the field Saturday at 1 p.m. for their home contest against the Marksville Tigers, there will be a lot of similarities between the two teams.
For starters, both teams lost heavily at the skill positions due to graduation and both are starting a number of young players at key positions.
The biggest thing the two teams have in common, however, is that they both have had to replace most of their offense.
“They (Marksville) are a lot like us with what they lost, but they look a lot crisper than we do,” said Wall of the Tigers’ offense. “They still have some skill guys that can move, receivers and stuff, and they mix it up real well.”
Much like Crowley, Marksville is having to retool its offense after losing the bulk of their skill players from the 2019 season in which the Tigers went 8-2 and were the No. 8 seed in the Class 3A playoffs.
Last season, the Gents and the Tigers got into a shootout with Crowley taking a 62-38 victory at Marksville.
The Tigers, however, return just one skill player from that group - quarterback John Small.
Small completed 21 of 35 pass attempts for 367 yards in the loss a year ago.
Gone, however, are his top receiver, Brayden Flores, who had seven receptions for 197 yards and two touchdowns in that game. Also departed is Marksville’s leading rusher, Daniel Miller, who had 173 yards and three touchdowns on 21 carries.
Small is also without his receivers Tre Davis Weaver and Travonta Antoine as well as running back Bryce Mosely, who all graduated in the spring.
“The quarterback is back and he’s a really good athlete with a lot of experience,” said Wall of Small, who threw for over 1,200 yards last year before missing the second half of the season due to injury. “I think they lost the (running) back from last year, but they still have some decent kids in there; but g the quarterback, there’s no doubt that he makes them go.”
The Tigers have struggled to start the season with losses to Pineville (25-11) and Iowa (45-13) and they have managed just over 400 total yards of offense thus far.
“They are 0-2, but Pineville is 5A and Iowa has the house back this year,” said Wall. “But you can tell it (talent) is there and they are very close. They are due for a breakout game.”
Tristan Dunbar is the Tigers’ leading running back with 23 carries for 87 yards and he has four receptions for 26 yards. Freshman Omarion Ford is next with 13 carries for 63 yards.
On the receiving end, Amyrion Mingo, also a freshman, is Small’s go-to target with 10 receptions for 121 yards.
“We’re going to have to be able to control the line of scrimmage somehow,” said Wall. “We’re going to have to find a way to make them throw the ball and try to put them in some long situations. We didn’t do that well last week.”
The glaring difference between the two teams is on the line where the Tigers average 245 pounds on offense. The are even bigger on defense.
Brennan Ravarre heads up the offensive line at 6-foot-5, 270 pounds while Orlando Simon and Chris Simon are the key cogs on the defensive line, both over 6-foot tall and over 300 pounds.
“They are going to outsize us in the box,” said Wall. “But they do play a bunch of kids both ways in the trenches.”
Another key player on the Tigers’ defense is returning linebacker Javon Sampson, who led the team in tackles a year ago. Ford also pulls double duty at linebacker.
“Their linebacking crew moves well,” said Wall.
The key for the Gents will be to find some consistency on offense, which has been a struggle through the first two weeks.
In two games, the Gents have mustered just 266 total yards of offense (176 rushing, 90 passing) and just 12 first downs.
“You know, we’re two weeks in and we haven’t clicked yet,” said Wall of his offense. “We’re just young in all the wrong places.
“We’re good for one or two plays then we sputter. It’s assignments and execution that’s so key for us right now that we can’t even think about exploring too much with things until we can get down the basics of what we’re trying to get done.”