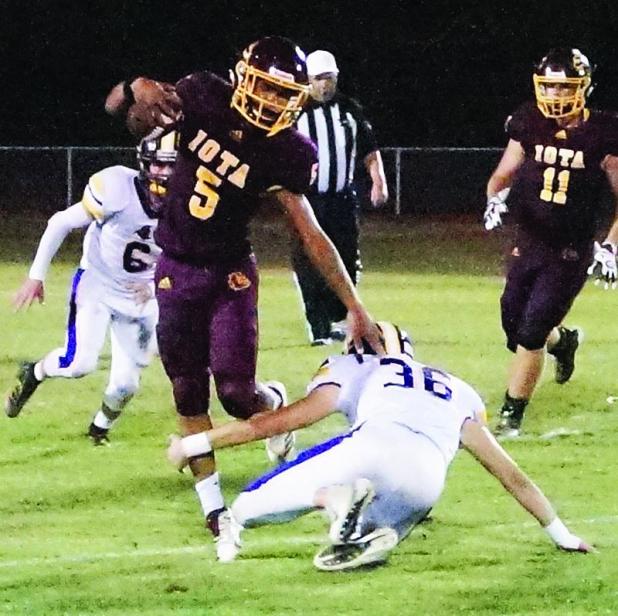 THE POST-SIGNAL / D. Sexton
Iota’s Tyrone Charlot slips past a defender last week during the Bulldogs’ 42-14 victory over South Beauregard. Charlot rushed for 127 yards and two touchdowns and had three receptions for 43 yards and a touchdown in the win.

Coming off a big victory over South Beauregard on Friday and with their first District 5-3A game, against the Church Point Bears no less, coming next Friday, the Iota Bulldogs game against the North Vermilion Patriots could be a situation where coaches may worry about their teams looking ahead.
However, Coach Josh Andrus' emphasis on focus, the Patriots 3-1 record in Class 4A and this being Iota's first road game in four weeks will probably ensure that won't be the case.
"We will be working on correcting mistakes and trying to get better, same as we do every week, before district play begins," said Andrus.
The Patriots are coming off of an emotional, 34-27 victory over the Erath Bobcats last week. North Vermilion had to withstand a furious, second half Bobcat rally in a game that wasn't decided until Patriot quarterback Darius Gilliam made a game-sealing, first down run with a minute remaining.
Gilliam, along with sophomore running back Bennie Freeman and senior back Kendrick Baudoin combine for a formidable Patriot rushing attack.
Coach Brett Blakely's boys are getting used to competing in close games. They defeated Ascension Episcopal 23-22 in their previous game. The only blemish on their record came at the hands of the always tough Kaplan Pirates.
The undefeated Bulldogs, on the other hand, have had their games decided well before the fourth quarter all season. Last week's 42-14 win over South Beauregard was the closest they came to being challenged all season. But after a slow start offensively, the Bulldogs attack got rolling in the second quarter behind the play of dependable seniors Luke Doucet (196 yards rushing, one TD) and Tyrone Charlot (127 yards rushing, 43 yards receiving, three TDs).
Quarterback Dawson Wallace threw the ball more than he has all season, going 8-18 for 101 yards and two touchdowns. The first year starter began slow, overthrowing receivers on a few occasions, but seemed to settle down as the game progressed and, most importantly, had no turnovers.
According to Andrus, his increased workload was by design.
"We're trying to get teams to stop crowding the line against Luke," said Andrus. "Once he (Wallace) settled down he played well."
The thought of Doucet having more space to run is frightening. An All State selection last year, Doucet's game has noticeably improved. Coaches said he spent much of his offseason in the weight room and he appears to have increased his speed. Aside from the bruising 7 to 10 yard runs Iota fans have become accustomed to, Doucet has broken off at least one run of over 70 yards in each game this season.
However, its the stellar play of Iota's defense that has them standing at 4-0.
Their defensive line, led by last year's returning starters Dylan Montgomery, Ethan Zaunbrecher and Chris Newman has been terrific all season. Their leadership, along with that of senior safety Andrew Ashby, has the Bulldogs playing nonstop until the end of every play.
At the linebacker position, the Bulldogs may have a rising star in Landon Doucet. The senior, who also plays on offense, seems to make at least one big play in each game.
The secondary, with Ashby being the only returning starter, was a concern for Andrus entering the season. However, the fifth year coach must be pleasantly surprised with the results this far. Newcomers Owen Daigle, Grant Callahan and Jeb Decuir have each had their moments and the unit has yet to have any game-changing breakdowns.
On special teams, senior kicker/punter Luis Doreteo has been a steady presence all season. He will be tough to replace next year.
If Iota gets started quick offensively and their defense doesn't miss the team bus, the Bulldogs shouldn't have a problem avoiding their first regular season loss since 2017.
Kickoff will be Friday at 7 p.m. at Notth Vermilion High School in Leroy.