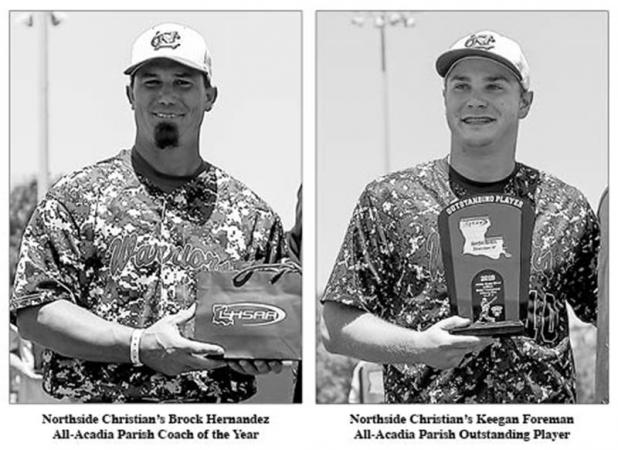 While the Northside Christian Warriors were loaded with talent from top to bottom during the 2019 prep baseball season, one player in particular stood out amongst the rest.
And it showed during the Warriors’ three playoff games.
Keegan Foreman earned the victory in all three games, hurling 14 2/3 innings and allowing just three runs, none earned. He struck out 21, including 11 in a 2-1 victory over Runnels in the Division V title game.
Foreman was also a force at the plate during the Warriors’ title run when he hit .363 (4-11) with a pair of doubles and an RBI.
For his efforts, he was a unanimous selection for the Outstanding Player award on this year’s Crowley Post-Signal All-Acadia Parish team that was released today.
Foreman threw 59 2/3 innings during his junior campaign and logged 77 strikeouts to go along with an earned run average of .187.
At the plate, he hit for a .455 clip with nine doubles, three triples, a home run and 26 RBI.
Northside Christian also took home the Coach of the Year honor in Brock Hernandez, who led the Warriors to their second state title.
Hernandez, who took over the baseball program in 2015, guided the Warriors to a 19-9 record during the regular season, including an 8-0 mark in District 7-C to clinch his third straight league title.
Hernandez’s Warriors entered postseason play as the No. 2 seed and knocked off ESA, 2-1, in eight innings to punch their ticket to the state tournament in Sulphur. The Warriors then knocked off Family Community, 4-3, in the semifinals before claiming their first title since 2014.
Other Warriors making the All-Parish team were Dustin Hernandez, John Walker, Anthony Stansbury and Mathew Richard.
Hernandez, the District 7-C Most Valuable Player, pitched and played both shortstop and second base during his senior season.
On the mound, the Coastal Alabama Community College signee struck out 58 in 49 innings and logged an earned run average of 2.39. At the plate, he hit .472 with seven doubles, two triples, one home run and 17 RBI.
Walker, who made the team in the outfield, hit 450 with 11 doubles and 29 RBI and Stansbury hit .356 with five doubles and one triple.
Richard, a junior outfielder who drove in the eventual winning run in the championship game, hit .330 on the season with a pair of doubles and 12 RBI.
Iota, the District 5-3A champion and state quarterfinalist, had the largest contingent to make the team with seven selections.
Senior Hunter Wriborg and sophomore Gavin LeBlanc each made the team as pitchers.
Wriborg, a Louisiana College signee, sported a record of 9-1 on the mound with a 2.54 earned run average. He logged 63 strikeouts in 63 1/3 innings. At the plate, he hit.325 with eight doubles, one triple, a home run and 24 RBI.
LeBlanc went 4-1 on the mound and logged 56 strikeouts in 34 innings. He had an ERA of 2.059 and also logged a save.
Mitchell Lege was one of two catchers selected after hitting .376 with six doubles, one triple, a home run and 24 RBI during his senior season.
Iota’s Tyler LeJeune, Nicholas Duplechain and Andrew Ashby also locked down spots on the infield.
LeJeune hit .321 as a freshman and had five doubles, two triples and 10 RBI. Duplechain, also a freshman, hit .354 with six doubles, three home runs and 25 RBI.
Ashby, a junior, hit .381 with seven doubles, two triples, four home runs and 27 RBI.
Grabbing a spot in the outfield was senior Trae Rambin, who hit for a .368 clip with six doubles and 24 RBI.
Notre Dame landed six spots on the team after winning District 6-2A and reaching the quarterfinal round of the playoffs.
Leading the way was District 6-2A MVP Garrett Miller, who went 6-0 on the mound with a 1.479 ERA. The senior struck out 55 batters in 47 1/3 innings.
Miller also hit .305 at the plate with seven doubles, one home run and 18 RBI.
Ethan Menard also made the team at pitcher after going 4-0 with a 2.283 ERA. At the plate, he hit .415 with six doubles and 16 RBI.
Matt Abshire made the team at catcher after hitting .417 for the Pios during his senior season. The Panola College signee logged nine doubles, one triple, three home runs and 13 RBI.
Making the team in the outfield for the Pios were senior Chase Habetz and sophomore Dominic Thibodeaux.
Habetz hit .317 with 10 doubles, one triple, four home runs and 20 RBI and Thibodeaux hit .307 with six doubles and 15 RBI.
Gabe Doucet locked down a utility spot after hitting .298. The senior also had two doubles, one triple, one home run and 11 RBI.
Rayne’s Darian Richard made the squad in the outfield and Ethan Theriot snagged a utility spot.
Richard, a senior, hit .333 with five doubles and seven RBI in district play. Theriot, a sophomore, hit .400 with a double and eight RBI.
Both Richard and Theriot were tabbed to the 4-4A All-District first team.
Rounding out the team was Crowley High’s Alyx Duhon and Church Point’s Ian Meche. Both made the team as utility players.
Duhon, a senior outfielder for the Gents, hit .319 with eight doubles, two triples and 14 RBI.
Meche, also a senior outfielder, hit .311 for the Bears with two doubles and 10 RBI.
Making the honorable mention list on this year’s team were:
- Northside Christian: Lance Martin, Nick Jones, Gabe Perry and Koye Credeur.
- Notre Dame : Will Vice, Blake Smith and Parker Seilhan.
- Crowley High: Zan Habetz and Christian Stafford.
- Iota: Gage Monceaux, Gavin Vidrine, Kameron Aucoin and Chaynery Johnson.
- Rayne High: Colin LaCombe, Will Arceneaux and Zach Fontenot.
- Church Point: Christopher Dailey and Wick Venable.