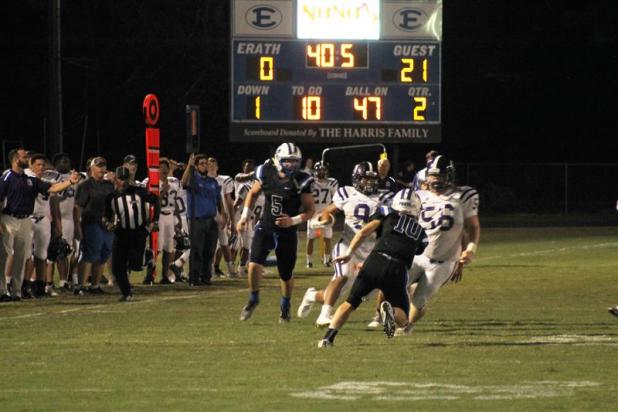 From the opening drive, the Rayne High Wolves showed what Thursday’s football game against the Erath Bobcats would be -- an offensive sprint by the Wolves for a 35-7 win.
Rayne compiled a total of 430 offensive yards on the night, 294 on the heels of Trent Winbush who scored five touchdowns on 19 carries.
“Our offense has really come around,” stated Rayne High Coach Curt Ware on Thursday’s win over Erath. “Looks like everyone’s doing their part.”
Ware continued, “Trent (Winbush) has really emerged as a leader. He’s a very good back and can basically do everything. He’s quick, fast, and strong which makes him hard to tackle. His build is deceiving which is an advantage for us.”
Winbush began Thursday’s contest right out the gate as Rayne High accepted the opening kickoff. Following a five-yard penalty which placed the Wolves near midfield, Winbush hit the right side of the line, broke a tackle, and scored a 50-yard touchdown.
An extra point by Morgan Manuel putbthe Wolves up 7-0 with only 18 seconds off the clock.
“I find that our guys this season are more aggressive, play a more intense game,” noted Ware of his players attitudes. “Everyone’s doing their job and it shows.”
That intensity carried over onto defense for the Wolves as they held Erath to 215 total yards on the night. The Bobcats were limited to only 32 rushing yards.
“Our defense has definitely gotten better,” explains Ware. “When you can limit a team to this kind of yardage, your defense is doing their part; which in turn, helps your offense put points on the board.
New to the Rayne defense is defensive coordinator Jacob Molbert, a Rayne native who recently completed a very successful career at UL-Lafayette.
“Jacob has helped us alot on defense,” Ware stated. “You can see the difference in their intensity and attitude. He (Molbert) gets our guys to that next level of play which has really shown in our defensive play.”
The second quarter of play saw Johnny Deculit set up a five-yard touchdown by Winbush, followed by a quarterback keeper by Darian Richard for a 16-yard TD run, again by Winbush. Manuel was on target for both extra points and the Wolves headed into halftime with a 21-0 lead.
The third quarter saw a couple attempts by Erath inside the red zone, but was halted by two QB sacks by Antonio Gabriel and Jamarcus Monroe, in addition to tackles for losses by Tyreece Beverly and Jamien Evans.
Rayne’s defense was led by Tyreece Beverly and John Daigle with six tackles, followed by Cannaan (5), Jamien Evans, Jamarcus Monroe, Grant Trahan and Beverly Guidry (3 each), and Tony Roberts, Zach Fontenot and Johnny Deculit with 2 apiece.
Rayne’s third quarter saw two additional Rayne touchdowns. A Richard completion to Zach Fontenot set up a 34-yard touchdown run by Winbush. Then, Winbush use a seam provided by his offensive line for a 61-yard touchdown score. Manuel completed his fourth and fifth extra point in the quarer for a 35-0 lead heading into the last quarter of play.
“Morgan (Manuel) has been kicking really well,” noted Ware of his junior kicker. “He almost made that 40-yard fieldgoal last night. He has come a long way and is still showing improvement.”
“Out entire special teams unit is doing well,” continued Ware. “Our kickoff coverage is improving. They are doing a lot everywhere on the field and it shows on the board.”
With a few new faces in the Rayne lineup, Erath’s John Pupera found Luke Frederick for a nine-yard touchdown pass. The extra point by Andrew Sonnier with two minutes remaining in the ballgame, the Rayne lead tough for a 35-7 win.
In addition to Winbush’s five touchdowns on almost 300 rushing yards, Rayne rushing leaders were Zach Fontenot, Darian Richard, Johnny Deculit, Dio Marquez and Darien Wilridge.
Wolf quarterback Darian Richard recorded six completions for 88 passing yards on the night.
Receivers for Rayne yards were Zach Fontenot (5 for 87 yards), Tyler Fontenot and Trent Winbush each with a reception.
“We were minus Darien Harmon this week,” remembered Ware of his offensive stats. “He twisted his ankle pretty good last week and we thought it was best for him to sit this one out as we get ready for district.”
Rayne will hit the road again this week as they will meet Leesville in their opening district contest of the season on Friday.
“If you look at our district, everyone has a winning record,” noted Ware of their district, one of, if not the strongest district in the state.
Ware concluded, “This is when things get interesting.”