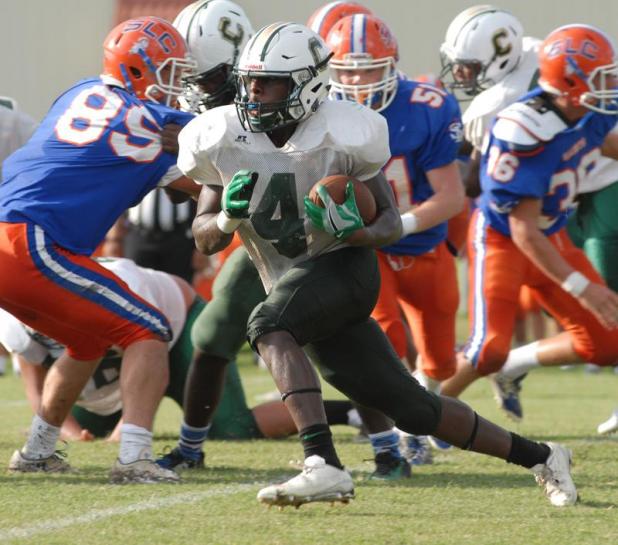 CROWLEY – Hurricane Harvey has come and gone and in its wake, it has left many obstacles in regards to the opening weekend of the prep football season.
For some, it has caused cancellations, while for others, it has postponed games and forced teams to play a day later with limited practice time.
In the case of the Crowley Gents, the most challenging aspect of Saturday’s season opener is their opponent - the Iowa Yellow Jackets.
Originally scheduled for a 7 p.m. kickoff on Friday, the Gents will now play Class 3A’s No. 6 ranked Yellow Jackets on Saturday at 3 p.m.
“They (Iowa) have a really good team, so this will kind of let us know where we are at this point,” said CHS coach Jeptha Wall of the Yellow Jackets. “We were desperately hoping that we would get to play this game.”
One of the biggest concerns for Wall is the limited amount of practice time his squad has had this week.
Although the Gents were impressive in their scrimmage and the jamboree, there were still things that the squad needed to correct heading into the opener.
“Our biggest flaw right now is kicking and we haven’t kicked a ball since last Thursday,” said Wall, whose team connected on just one of seven extra point attempts in the jamboree. “There’s a lot of things we have to do, corrections special teams wise.
“We’re still behind on a lot of stuff, so yeah, there’s always some worries when you haven’t been able to prepare like you would have liked.”
And when playing a team the caliber of Iowa, which went undefeated through a tough District 4-3A slate in 2016 and advanced all the way to the quarterfinals, preparation is the key.
That’s especially the case when you face a team with the athleticism that the Yellow Jackets have.
Dual-threat quarterback Dyami Huntsberry returns in the Yellow Jackets’ spread offense and he has three veteran receivers to target in Marka’il Nixon, Cole Fleming and Kaden Jones.
Iowa’s running backs aren’t too shabby either in Jedd Self and John Baker.
“The big thing is that they will be able to match us up speed wise,” said Wall. “They have two real good receivers and an impressive tight end.
“And their quarterback is super. He started last year and he just looks very crisp.”
Up front, Iowa returns all five starters - Nick Reed, Jakari Singleton, Devin Guillory, Ryan Denison and Brady Fontenot - and the group is extremely fast.
Wall’s unit will counter with a productive offense of its own. It’s an offense that posted seven touchdowns in a pair of 15-minute halves against Erath in last week’s jamboree.
Paul Dugar threw for just over 200 yards in the contest on just five completions while seven players combined to rack up 266 yards of offense on the ground.
Chris Lewis had two carries for 101 yards and Donald Francis carried nine times for 83 yards.
Defensively, the Yellow Jackets also return a wealth of experience, mostly in the secondary.
Safeties Darius Daniels, Bryce Buquet and Koby Batiste return as does corner Koby Batiste. Also returning is linebacker Aaron Murillo.
“They are based more out of a 4-2-5, but every once in a while they get in a 50 and they play some man coverage because they have enough athletes to do that,” said Wall. “It will be a good speed matchup between the two of us. I don’t think we have that plus factor for us.”
Where the Yellow Jackets are the most vulnerable is on the line where they lost three starters.
“Their line is pretty good,” said Wall. “They are not real big, but they are very well coached. They are just solid and they are never out of place.”
The key for the Gents will be to move the chains and sustain drives on what will likely be a damp and messy field.
“You have to be a ball-control offense, no turnovers, control the line of scrimmage and try and eat the clock up a little bit. We have to try to keep their offense off the field a little bit,” said Wall. “Whatever we do on first and second down, as far as running the ball, needs to be a little bit more consistent up front.”
The only notable injury for the Gents is senior running back Keith Wilson, who missed last week’s jamboree with a bruised bicep tendon. He is going through further evaluation and will be a game-time decision.